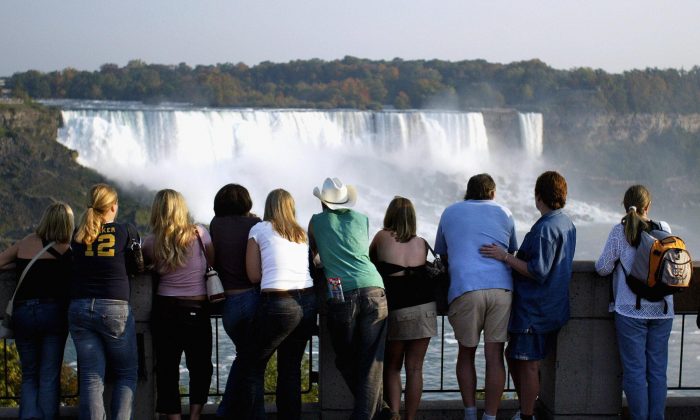 Tourists look out at Niagara Falls from the Canadian side of the Canada/U.S. border. Canada is halting efforts to attract U.S. tourists after years of largely failing to draw Americans from other leisure destinations. (Don Emmert/AFP/Getty Images)
Canada

Canada Quits Competing for US Tourists

The Canadian Tourism Commission’s 2012 Annual Report says the company has stopped its marketing efforts to the U.S., citing tough competition from other destinations.

The shift has been in the works since 2010, when the CTC cut direct-to-consumer advertising and marketing through travel agents and tour operators in the U.S.

“In 2012, we also terminated our media relations, public relations, and social media work in the U.S., remaining active in that market only through our business events sales activities and our annual Canada Media Marketplace event,” says the report.

“While U.S. Leisure has traditionally been—and remains—important to Canada’s tourism industry, it is also ferociously competitive.”

Canada also wasn’t getting a decent return on investment from the U.S. citizens who did venture north; Americans were the thriftiest of all visitors last year, spending an average of $518 per trip, says the report. By comparison, tourists from Brazil were the highest spenders in 2012 with an average of $1,874 spent on their Canadian visit, followed by Australia at 1,781 and China at $1,670.

Since 2000, Canada’s overall share of the global tourism industry revenue has also been on the decline—dropping from 35 percent of the industry total to just below 19 percent—due in part to the dwindling U.S. market. In 2011, Canada fell from its position as a Top 10 travel destination to number 18.

The CTC says its strategy will now focus on redirecting resources from U.S. promotions and investing only where “the Canada brand can lead,” to ensure the highest possible return. The commission plans to target its promotions to travellers in Australia, Europe, Mexico, Brazil, China, India, Japan and South Korea—which currently make up the majority of Canada’s international visitors.

“We continue to invest in markets that provide the largest sources of tourism revenue for Canada, while also tapping into growth from new and emerging markets,” says the report. “We target those travellers who have a high propensity to spend, and invest in those markets where Canada’s strong tourism brand leads.”

This strategy is also forged by broader changes to Canadians’ travel patterns and funding cuts to the CTC itself. Last year the commission’s base funding was cut from $72 million to $58.5 million—forcing it to find ways to get the most tourism bang for the buck.

The CTC says it drew a total of 598,100 visitors to Canada last year through direct-to-consumer advertising and travel trade promotions.

The commission says it chose to focus resources on international travellers rather than domestic in order to avoid duplication of provincial marketing efforts. In addition, Canada’s relatively small population has little potential for market growth with more Canadians travelling abroad, and those who do travel within the country spending less than $300 per trip, the report says.

Canada also experienced a “travel deficit” of an estimated $17.8 billion last year, a deterioration of 9 percent year over year as “payments by Canadians abroad were more than double the receipts from visitors to Canada,” the report states.

Tourism accounts for more than 608,500 jobs across the country, and in 2012, generated over $82 billion in tourism revenue. With over $15 billion of this coming in from international travellers, tourism is Canada’s number one service export.

According to the United Nations World Tourism Organization, globally tourists spend $3 billion a day, or $2 million a minute, making tourism one of the world’s fastest-growing industries.