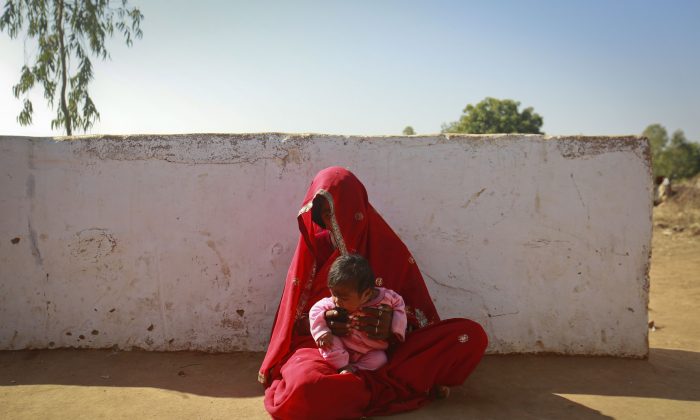 Krishna, 14, sits with her four-month-old baby outside her house in a village in the northwestern state of Rajasthan, India, Jan. 21, 2013. Krishna was married to her husband Gopal when she was 11 and he was 13. Canada is contributing $20 million over two years to UNICEF toward ending child marriage in six countries. (REUTERS/Danish Siddiqui)
Canada

Canada’s ongoing efforts to end child, early, and forced marriage just got a funding boost. Foreign Affairs Minister John Baird has announced that Ottawa will contribute $20 million over two years to UNICEF toward ending the practice in six countries.

UNICEF will put the funding toward efforts in Bangladesh, Burkina Faso, Ethiopia, Ghana, Yemen, and Zambia to strengthen programming and political support to end child marriage, which is widespread in these countries.

Worldwide, an estimated 14 million girls under 18—with some as young as 5—are forced into marriage every year. One in nine marries before the age of 15.

Complications related to pregnancy and childbirth are the leading cause of death among girls between the ages of 15 and 19 in the developing world, according to the government.

The practice is also a significant contributor to poverty; child brides typically do not attend school or drop out, leaving them without the education that could help them break free of poverty.

“This troubling practice is a violation of human rights and also hinders economic development. When girls can’t reach their full potential, everyone suffers—girls, their communities, and their countries,” Baird said in a statement announcing the funding.

Plan Canada, one of the world’s oldest and largest international development agencies, has long advocated for ending child marriage. The agency says that in order to be effective, Canada’s approach must aim to address the practice at multiple levels and build on the gains already made.

This would include working with families to help them understand that girls and their communities are better off if marriage is delayed; supporting children and youth who are at risk of early marriage; and reaching out to religious and community leaders—including men and boys—to become advocates of ending the practice within their own communities, among others.

“As a humanitarian organization, working closely with children and families in over 90,000 communities worldwide, we know the drivers of child marriage are deeply rooted and complex,” says Rosemary McCarney, president and CEO of Plan Canada.

“In many cases, the best of intentions are behind child marriages. Some families desperately believe marriage will provide for the basic needs of their girls, or will keep them safe during times of disaster or violent conflict in their countries. Our efforts need to address legitimate concerns like these that influence families’ decisions.”

In other cases, however, families are so wracked by poverty that they marry off their young daughters for the dowry money and to have one less mouth to feed.

Over the last two years, Canada has been working to end child marriage in developing countries and has been involved in several initiatives to focus more attention on the issue, including spearheading the creation of the International Day of the Girl Child.

Last October, Baird announced $5 million in new money to tackle the causes of child, early, and forced marriage around the world, and programming has been initiated in several countries.

Plan Canada says the practice can be brought to an end, but only if “Canada and the world tackles the problem at all levels and in an integrated way. This is key to seeing that good policy translates into life-saving and transformational change on the ground.”