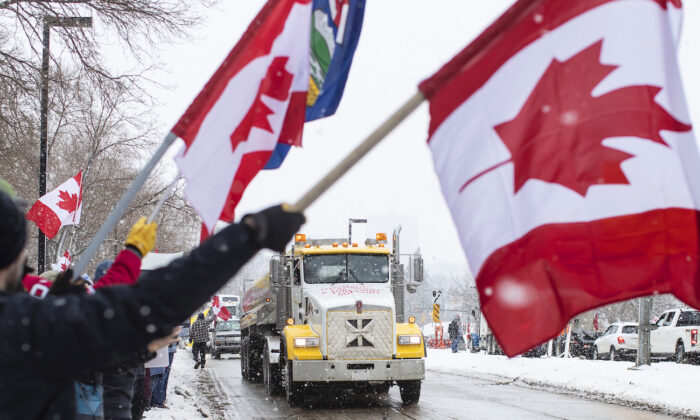 On Feb. 14, Canadian deputy prime minister and minister of finance Chrystia Freeland announced a government crackdown on the now-infamous “Freedom Convoy 2022.” Freeland stated, “If your truck is being used in these illegal blockades, your corporate accounts will be frozen, the insurance on your vehicle will be suspended.” The announcement follows Canadian prime minister Justin Trudeau’s declaration of the Emergencies Act. These emergency measures were instituted following weeks of economic and quality-of-life disruptions in Canada, specifically in Ottawa.

In Ottawa, a large convoy of truckers gathered with pedestrian protesters to signal their disapproval of COVID-19 vaccine mandates and other associated COVID-19 measures. These protests have spread throughout Canada, with many of the individual protesters expressing their concerns about the government’s COVID-19 policies. Bari Weiss’s Substack channel posted an excellent article about “What the Truckers Want.” The “Freedom Convoy’s” message is clear: end the COVID-19 emergency measures.

A number of Canadian provincial governments have lifted COVID restrictions, including the Manitoba, Saskatchewan, and Ontario governments, but whether or not the “Freedom Convoy” forced the provinces to drop requirements is unclear. Trudeau, however, has doubled down on his rhetoric in opposition to the convoy’s requests. In declaring the Emergencies Act for the first time since its passage in 1988, Trudeau has declared war on the protesters. He stated as much: “It is no longer a lawful protest or a disagreement over government policy. It is now an illegal occupation. It’s time for people to go home.”

The protest has been going on for some time with the assistance of everyday individuals who have crowdfunded on behalf of the Freedom Convoy organizers. On Feb. 4, the GoFundMe page for the Freedom Convoy 2022 was taken down for being “in violation of … Terms of Service … and has been removed from the platform.” Following GoFundMe’s actions, the convoy organizers turned to GiveSendGo to crowdfund. On Feb. 10, the Ontario Superior Court of Justice issued an order halting access to funds collected from GiveSendGo. On Feb. 12, GiveSendGo tweeted “GiveSendGo is working with many different campaign organizers to find the most effective legal ways to continue funds flowing.” According to CNN Business, “although GiveSendGo is refusing to comply with the court order, it may still be forced to comply. That’s because the order also applies to the website’s third-party payment processors.” Herein lies the greater issue at hand.

Although the freedom to assemble (or protest) may be protected, governments have learned that they can quash protests by restricting activists’ access to payment processors and other financial intermediaries. Following 9/11, Canada amended the Proceeds of Crime (Money Laundering) Act and broadened it to include provisions about terrorist financing, renaming it the Proceeds of Crime (Money Laundering) and Terrorist Financing Act (PCMLTFA). According to the Financial Transactions and Reports Analysis Centre of Canada, one of the objectives of the PCMLTFA is “to implement specific measures to detect and deter money laundering and the financing of terrorist activities to facilitate the investigation or prosecution of money laundering and terrorist financing offences.”

Following Trudeau’s Emergencies Act declaration, Freeland announced that the government would broaden the PCMLTFA to include crowdfunding platforms and their associated payment service providers. During a press conference, Freeland stated, “[T]he illegal blockades have highlighted the fact that crowdfunding platforms and some of the payment service providers they use are not fully captured under the proceeds of crime and terrorist financing act.” Additionally, she stated that the “changes cover all forms of transactions, including digital assets such as crypto currencies.” The Emergencies Act declaration will temporarily allow banks, without a court order or fear of being sued, to freeze personal and business accounts suspected of being used to further the blockades and will require banks to “report financial relationships with customers involved in the illegal blockades to the [Royal Canadian Mounted Police] or the Canadian Security Intelligence Service.”

The logical conclusion based on the Canadian government’s actions is that Trudeau views the “Freedom Convoy” as a form of terrorism. If Trudeau wanted to shut down the protests, he could have either established a meeting with their organizers to discuss their demands or quashed the protest by sending in the military. The prime minister decided to avoid the protesters’ demands and to establish a third option: coerce payment services providers and financial institutions to act as intermediaries of the state. This newly “found” power builds on a long line of practices toward debanking politically disfavored individuals, writes the Daily Wire’s Ben Shapiro.

Given these circumstances, it is clear that Trudeau is scrambling for a way to disregard the Freedom Convoy’s demands while also quashing the protests, or “occupation,” as he calls it. In June 2020, Trudeau was pressed on then-U.S. President Donald Trump’s idea of using soldiers against protesters and rioters. He responded, “[W]e all watch in horror and consternation what’s going on in the United States.” It is clear that Trudeau was troubled by a heavy-handed approach to the Black Lives Matter protesters and rioters; however, his response to the “Freedom Convoy” has been less sympathetic. In fact, he referred to the protesters as a “fringe minority” with “unacceptable views.”

The prime minister fell into the same political trap as former U.S. President Barack Obama and former U.S. Secretary of State Hillary Clinton. Obama, Clinton, and now Trudeau can all be depicted as out-of-touch elitists with contempt for those who hold contrary political opinions. For decades, politicians have deferred democratic decision-making to so-called experts in administrative agencies to shield themselves from political accountability; i.e., voter preferences. This long-term strategy has demonstrated a degree of contempt for the average voter. Trudeau has engaged in a similar sleight of hand by abusing the levers of government power to coerce financial institutions and payment services providers to conduct the business of the state.