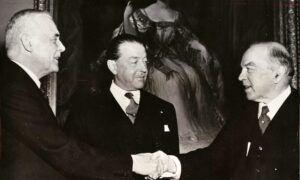 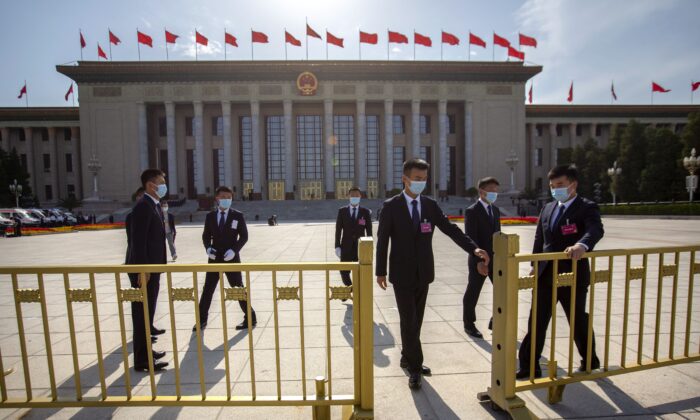 Security personnel close the gates in front of the Great Hall of the People after the closing session of China's National People's Congress in Beijing on May 28, 2020. (AP Photo/Mark Schiefelbein)
Viewpoints

Canada Must Open Its Eyes to Beijing’s Belligerence

Before his death in 1994, Richard Nixon gave an interview to his former speechwriter William Safire in which he reminisced about his time as U.S. president and the momentous events over which he presided.

Intimating his thoughts on the post-Cold War landscape, Nixon had some rather prescient and regretful words on the subject of China, the opening to which he and Henry Kissinger strategically orchestrated in 1972. Asked if the opening and resulting economic engagement had sowed the seeds of political freedom in China as those in the West were hoping it would, Nixon’s reply was: “We may have created a Frankenstein,” as in Frankenstein’s monster.

Twenty-six years later, after the Chinese regime’s mishandling of the virus outbreak allowed it to spread around the world—not to mention numerous other wrongdoings over the years—it seems incredible that our political class continues to entertain the notion that communist China is a well-meaning partner whose belligerence can be tamed by accommodation.

Throughout the entire COVID-19 crisis the Canadian government has genuflected to Beijing, appearing to only deviate if the immediate political pressure becomes too much to avoid, such as thanking Taiwan for its generous donation of personal protective equipment, or Prime Minister Trudeau finally admitting that there are questions “particularly” for China regarding the pandemic.

While countries like the United States, Australia, France, and the United Kingdom are beginning to wake up to the folly of the modernization project that has aided China’s rise to superpower status, Canada remains caught up in the delusion.

This includes turning a blind eye to China’s propensity to throw its weight around on Canadian soil, particularly the situation where those who have come to Canada to escape the wretched Beijing regime often end up being abused by it through covert means.

A thorough report by the Canadian Coalition on Human Rights in China and Amnesty International released on May 12 details with disturbing clarity how various groups within the Chinese diaspora have been subjected to numerous depredations, including blackmail, censorship, monitoring, and at times, violent assault. The typical pattern goes like this: after a member of Canada’s Chinese community—whether it be Tibetans, Uyghurs, or Falun Gong adherents—speaks out publicly about the crimes of the CCP, Chinese consulates and pro-China groups respond virulently, the latter likely doing so in coordination with the regime’s United Front organization in a manner that creates the façade of a “spontaneous” demonstration.

This kind of thing has been going on for years and nothing gets done about it. The report notes there has been no improvement since earlier findings in 2017: the abuse is wide-ranging, pervasive, and consistent with allegations of a systemic campaign. It notes that Beijing-backed Chinese actors appear to have become “emboldened” in their efforts to deter human rights activists in Canada by the inadequate response from Canadian officials.

Spectacles in recent months have served to further unveil Beijing’s hubristic fervour and aggression, such as the Calgary Chinese consulate’s ridiculous criticism and threats toward Alberta Premier Jason Kenney for suggesting there be a “reckoning” with China over COVID-19.

Or the Chinese Embassy denouncing the Macdonald-Laurier Institute for “anti-China nonsense,” accusing it risibly of “interfering in China’s internal affairs” and collaborating with “Taiwan Independence” forces and Falun Gong, a persecuted group in China.

Many have sounded the alarm on Chinese subversion for years, only to be scandalously dismissed by those who could actually take the necessary action on it, or condemned as “racist” by those who have imbibed the propagandistic idea that the Chinese people and the CCP are synonymous, which allows the regime to deflect any accusations of wrongdoing as it seduces wide-eyed progressives restive in their hunt to find and extinguish bigotry everywhere.

In his book “Claws of the Panda,” Jonathan Manthorpe attributes the predicament we’ve been in with China to the “missionary” sensibility that persists in the Canadian mind. The Canadian fascination with China and the liberalizing mission, he contends, has some continuity with Canadian Christians in the 19th century who believed in the “notion of the Gospel as a charter for social change.” This manifests in the confidence in the “self-evident appeal of Canadian values” that continues to guide our approach to China today. Naively, it continues to be based on the premise that through continual engagement and exchange, the CCP will eventually disabuse itself of its ruthlessness and realize the wisdom of the rule of law and upholding a social contract with its people.

The totalitarian conceit put forward by Lenin holds that the democratic system is a sham and relies on irredeemable contradictions and self-deceptions that will lead to its collapse. In the case of the CCP, this has proven true insofar as it has been allowed to take advantage of Canada’s open society and manipulate the country’s institutions and processes for its own ends. In so doing, it has eroded Canadian sovereignty and been able to violate the rights of Canadians.

This all finds its genesis in the failure of politicians to protect their citizens and elevate this duty above the false hope in a relationship that’s never going to exist as they want it to.

Many of Canada’s allies have realized their error when it comes to the “Frankenstein’s monster” in Beijing and are changing course. It’s time Canada did, too.