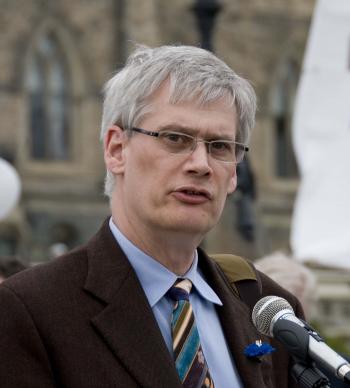 MP Bill Siksay, first chair of the newly formed Parliamentary Friends of Falun Gong, speaking at the Ottawa Human Rights Torch Relay (HRTR) rally on Parliament Hill in May 2008. The HRTR, through grassroots events, spoke out against the Chinese regime's worsening human rights abuses prior to the 2008 Beijing Olympics. (Samira Bouaou/The Epoch Times)
US

Parliamentary Friends of Falun Gong (PFOFG) is the first such group of Parliamentarians in the world lending focused support to the practitioners of the system of meditation and moral teachings, also called Falun Dafa, that has suffered a decade of persecution in communist China.

“Our first goal is to make sure Parliamentarians are better informed about issues related to Falun Gong,” said PFOFG chair Bill Siksay.

“One of the key purposes of [PFOFG] is to encourage respect for fundamental human rights in China.”

Introduced in China in 1992, the practice based on the principles of “Truthfulness, Compassion, Forbearance” rapidly flourished due to its benefits to physical and mental health. By 1999, it had 70 to 100 million followers, according to government estimates, just before the totalitarian state launched a massive campaign to “eradicate” it.

Mr. Siksay said the group’s first step is to meet with the Falun Dafa Association of Canada (FDAC).

Future activities may include sponsoring programs and events with FDAC on Parliament Hill such as the May 27 China human rights forum hosted by MP Scott Reid, a PFOFG director.

“We are extremely delighted to learn that this group has been formed,” said FDAC president Li Xun. “The concern by Parliamentarians sends a strong indication of the significance of the matter. It will send an encouraging message to the practitioners in China.”

Ten years ago, Canada also took a lead as the first country to publicly condemn the persecution. Canada filed an official protest with the Chinese foreign ministry shortly after mass arrests and detentions of practitioners began on July 20, 1999, as reported by The Globe and Mail.

At a Canada-China human rights meeting that November, then-Secretary of State (Asia-Pacific) Raymond Chan said his delegation would raise “specific issues related to religious freedoms and basic rights and reports of ill-treatment of Falun Gong adherents.”

The Canadian Press reported that Falun Gong was the third most frequent subject of correspondence to the Prime Minister’s Office in 2005.

Parliamentarians’ efforts and Canadians’ concerns over the years have led to the release of practitioners in China and compelled former prime ministers Jean Chrétien and Paul Martin to raise the issue of the persecution with Chinese leaders.

Support has continued despite ongoing attempts by the Chinese embassy and consulates to vilify Falun Gong, including displaying hate materials in their visa offices, controlling Chinese-language media to turn public opinion against the practice, and pressuring Canadian officials not to support practitioners.

But the impact of such actions cannot be ignored.

“It’s always been apparent to me that there is significant misunderstanding about the practice of Falun Gong,” said Mr. Siksay.

He said if his colleagues have good information and are aware of the important issues concerning the practice, “I can’t see how it wouldn’t have an effect on government policy.”

The founding PFOFG membership comprises two senators and 18 MPs from all parties represented in Parliament.

Mr. Di Nino initiated the idea of the PFOFG six months ago.

Mr. Wrzesnewskyj has introduced a private member’s bill to fight the international underground trade in human organs and other body parts. He drafted the bill partly due to a 2006−2007 Canadian report documenting evidence that the Chinese regime has killed tens of thousands of Falun Gong practitioners to extract organs for lucrative transplant surgeries.

M-236, co-sponsored by current International Trade Minister Stockwell Day, resulted in the release of eight practitioners within a year.

Irwin Cotler, another PFOFG member, is the Liberal Party’s Special Counsel on Human Rights and International Justice. As voluntary legal counsel, he helped rescue two Falun Gong practitioners with status in Canada who were imprisoned in China for their beliefs. Zhang Kunlun and Lin Shenli both returned to Canada after being freed.

Mr. Li believes the PFOFG “will play a significant role in the Parliament” as it reflects the wish of Canadians as well as advances Canada’s leadership role taken as early as 1999 when the persecution began.

“Canadians who practice Falun Gong have asked for our help,” said Mr. Woodworth in a news release. “The very least Parliamentarians can do is stand up for human rights whenever they are called upon to do so.”