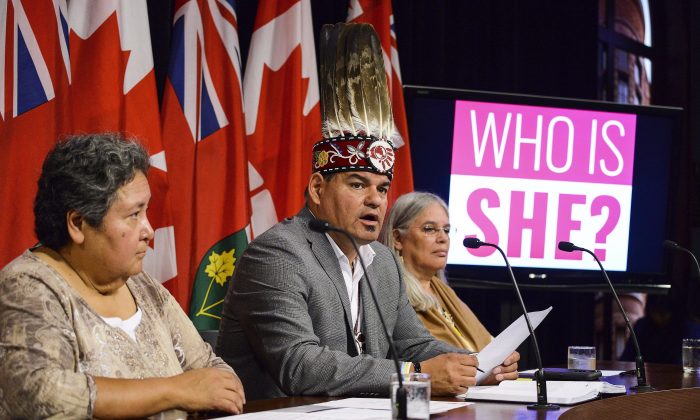 (L-R) Deputy Grand Chief Denise Stonefish, Ontario Regional Chief Isadore Day, and Chief Ava Hill announce a new campaign called “Who is She” at the Ontario Legislature in Toronto on Sept. 9, 2015. The campaign will help raise funds and awareness for the implementation of an Ontario First Nations-led inquiry process into missing and murdered Indigenous women and girls. (The Canadian Press/Aaron Vincent Elkaim)
Canada

TORONTO—First Nations chiefs in Ontario are launching an online fundraising campaign to pay for their own public inquiry into missing and murdered aboriginal women.

Ontario Regional Chief Isadore Day says he doesn’t want to wait any longer for the federal government to agree to call a public inquiry, and notes the fundraising campaign, called “Who is She,” will help focus on the need for a national probe.

Premier Kathleen Wynne, who will deliver the keynote address at the formal launch of the campaign, says it’s laudable that the chiefs are starting the campaign in Ontario, but she will continue to push for a national inquiry.

The Conservative government has consistently refused to call a public inquiry into the missing and murdered women, saying more study isn’t needed because over 80 percent of the killings are solved by police.

Both the Liberals and New Democrats have promised to call a public inquiry if they win the Oct. 19 federal election.

SOOKE, B.C.—Scientists say a fifth baby has joined an endangered population of killer whales off British Columbia’s coast. The newest calf in the L pod was spotted frolicking with its mother on Sept. 8 near Sooke.

The Washington state-based Center for Whale Research says the baby, dubbed L122, is the newest member of the pod since last December. It says the calf was photographed from a research vessel and measured using a drone that was already doing work on southern resident killer whales.

That population is made up of three pods: J, K, and L. The centre’s senior scientist Ken Balcomb says only 35 of the 122 orcas born in L pod in the last 40 years are still alive.

EDMONTON—Alberta’s environment minister Shannon Phillips is acknowledging the provincial government is coming under more international pressure to improve its record on climate change.

Phillips said she’s had meetings with government representatives from the United States and the United Kingdom, and that they both want Alberta to take a leadership role in the fight against global warming.

The two countries have offered to do what they can to help Alberta reduce its growing emissions of greenhouse gases, said the minister, who was speaking at a conference on climate change sponsored by a clean-energy think-tank.

Chief Allan Adam, who leads an aboriginal community in the middle of oilsands developments, told the conference that the environment is all but overloaded and no new developments should be built.

TORONTO—A survey of 20,000 people in 11 countries done by Aimia Inc. suggests a minority of them were satisfied with the rewards they get in exchange for sharing personal information with businesses.

The Montreal-based company said 31 percent of the Canadian respondents rated their personal information as “highly valuable” and 26 percent said that they expect better service and benefits in return for sharing it.

However, only eight percent of the Canadian respondents felt they get better offers as a result of sharing the information.

Ikea monkey to remain at sanctuary after change of ownership

SUNDERLAND, Ont.—The Ikea monkey doesn’t have to worry about finding new digs now that new owners have bought the sanctuary and the property where he lives.

Named Darwin, the monkey became famous in 2012 when he was found wandering outside a Toronto Ikea store wearing a shearling coat. He has been living at Story Book Farm Primate Sanctuary since a court placed him there.

Story Book board member Daina Liepa says Darwin and 19 other monkeys faced eviction after the sanctuary’s previous owner went through a divorce and decided to sell. The board had trouble raising money to buy the land and feared they wouldn’t be able to find Darwin and the other animals a new home.

Liepa says two benefactors came forward to buy the property and officially closed the deal in mid-July. She says they have big plans to expand the sanctuary, bring in two research monkeys, and have an unveiling ceremony sometime next year.

Thanks to a high-profile makeover earlier this year, Canada’s controversial temporary foreign workers program allows labour market impact assessments on request and requires employers to demonstrate no Canadians were available to take the jobs.

The court challenge claims the tribunal charged with issuing the permits has been unjustly exempting shipping companies from the assessments at a time when there are hundreds of qualified, unemployed Canadian crew members who could have filled those jobs.

The law says foreign-flagged ships can operate between ports in Canadian coastal waters as long as they use domestic crews, but Borins says the federal Conservative government has been giving shipping companies a free pass.