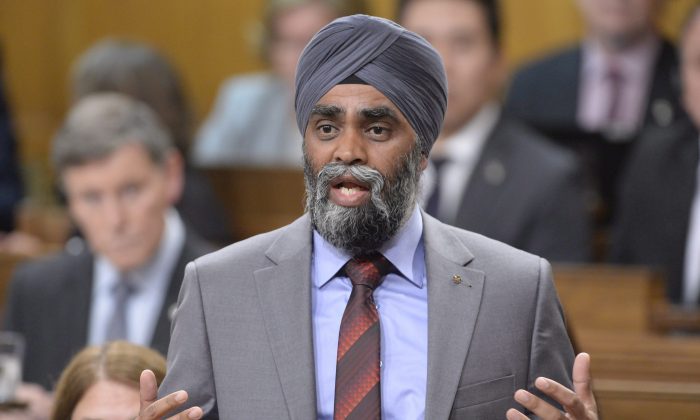 Defence Minister Harjit Sajjan during question period in the House of Commons on Sept. 20, 2016. (The Canadian Press/Adrian Wyld)
Canada

OTTAWA—Defence Minister Harjit Sajjan says Canada will address China’s use of the death penalty during negotiations of a possible extradition treaty.

Sajjan was defending the government’s pursuit of the deal, which drew criticism from the Official Opposition after it was detailed on Prime Minister Justin Trudeau’s website last week.

Conservative foreign affairs critic Peter Kent said the treaty must include an absolute guarantee that no individual sent back to China face the death penalty, given “the unfortunate history that China has of extrajudicial arrests and imprisonment, torture in prison, and execution on some of the flimsiest of charges.”

Two major human rights organizations, Amnesty International and Human Rights Watch, are also questioning Canada’s pursuit of an extradition deal with China. They say it doesn’t square with China’s rights record, including its widespread use of the death penalty.

The government announced the proposed treaty as part of a new “high-level dialogue” with China on national security and the rule of law, and the topic is likely to be discussed during Chinese Premier Li Keqiang’s visit to Ottawa this week.

An economist has a message for the federal Liberals as they try to come up with a way to price carbon that will appease 13 provinces and territories: Don’t bother.

Mark Jaccard from Simon Fraser University says any price on carbon high enough to make a difference will be high enough to ensure the electoral defeat of any government that imposes it.

Jaccard says a carbon tax or carbon price would have to be about $200 a tonne before it would help Canada meet its greenhouse gas reduction targets. That’s almost seven times higher than the highest price on carbon now charged anywhere in Canada.

Jaccard says a more effective tool would be to regulate vehicles or set emissions caps for individual industries.

ANTIGONISH, N.S.—A year ago, members of the Hadhad family were Syrian refugees in Lebanon—but now they’re running a chocolate business in Nova Scotia, with Prime Minister Justin Trudeau telling their story at the United Nations.

Trudeau opened his speech to the Leaders’ Summit on Refugees at the U.N. in New York on Sept. 20 by talking about Peace by Chocolate, which opened last month in Antigonish and has begun hiring local employees.

Tareq Hadhad said his family is so proud that Trudeau chose to tell their story. He said they have been flooded with emails, phone calls, and visitors since the prime minister’s speech, and he expects it will provide a big boost for the small company working toward success.

PORTLAND, Maine—The United States and Canada have brokered a deal to share what’s left of the dwindling North American cod fishing business in the Atlantic next year.

Both countries fish for cod, an important food fish that has declined in population following overfishing and warming ocean temperatures. The two fisheries overlap in the eastern reaches of Georges Bank, an important fishing area located off the coast of New England.

VICTORIA—The silverware at Government House in Victoria, B.C., is getting extra special attention in preparation for the arrival of the royals on Sept. 24.

The Duke and Duchess of Cambridge and their young children, Prince George and Princess Charlotte, will spend eight days touring British Columbia and Yukon, and the official residence of the lieutenant-governor will be their home base.

Executive chef Aleks Kornat says he’s sourcing local ingredients and recipes to prepare for what he says will be a B.C.-based—but so far, secret—menu for the royal guests.

No appeals over court ruling against Northern Gateway pipeline

VANCOUVER—The federal government and Northern Gateway say they will not appeal a Federal Court of Appeal decision that reversed Ottawa’s approval for the pipeline project that would link Alberta’s oilsands to British Columbia’s north coast.

The Federal Court of Appeal said in June that the government had failed in its duty to consult with aboriginal people on the project.

Shortly after Northern Gateway announced it wouldn’t appeal the decision, Natural Resources Minister Jim Carr said the government also has no plans to file an appeal.