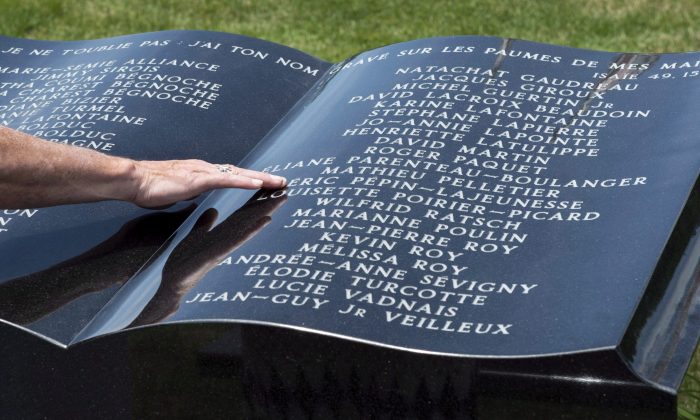 A man touches a stone monument in front of Ste-Agnes church in Lac-Megantic following a memorial service for the 47 victims of the train derailment a year ago, July 6, 2014. A Quebec judge has given his final approval regarding the terms of the $450-million settlement fund for victims and creditors of the Lac-Megantic rail disaster. (The Canadian Press/Paul Chiasson)
Canada

MONTREAL—A Quebec judge has given his final approval regarding the terms of the $450-million settlement fund for victims and creditors of the Lac-Megantic rail disaster.

Superior Court Justice Gaetan Dumas signed off Oct. 14 on the final agreement between victims, creditors, and about 25 companies accused of responsibility in the train derailment that killed 47 people on July 6, 2013.

Canadian Pacific Railway, the only company accused in the case to have not offered money, had requested that changes be made to the final version of the fund. The railway sought leave to appeal the settlement fund but dropped its motions after learning all sides agreed to change some of the language of the terms.

Patrice Benoit, lawyer for the now-defunct railroad at the centre of the disaster, says the court has some procedural issues to take care of, but victims should begin receiving cheques before Christmas.

LILLOOET, B.C.—A man suspected in a violent assault at a First Nation band office in the British Columbia Interior is dead and 10 others are hurt after an attack that reportedly involved a hammer.

RCMP said they were called just before 8:30 a.m. Oct. 14 to a report of a man with a weapon at the Bridge River Band Office near Lillooet. When police arrived they found the suspect already restrained.

“RCMP members arrested the male but were unable to transport him as he became unconscious and unresponsive,” police said in a news release.

The officers started CPR, but resuscitation efforts were unsuccessful and the man was pronounced dead at the scene, police said. The injured people have been taken to hospitals around the region.

An emergency worker who didn’t want to be named said the man apparently attacked one person with the hammer, and when others in the office went to help they were also beaten.

Bridge River Indian Band Chief Susan James issued a statement, saying her immediate concern was to ensure that the families involved in the tragedy were being helped.

“Our attention now will be on the healing work we need to do. This tragedy has put our community in shock.”

Panda gives birth to two cubs at Toronto Zoo; won’t be on display for 5 months

TORONTO—A panda on loan from China gave birth to two cubs on Oct. 13, but the Toronto Zoo says the public won’t be able to see them for a few months as they face a critical time for their survival.

The zoo has no immediate plans to show or even name the cubs. “They’re so small and so vulnerable at this age we don’t want to get ahead of ourselves,” said zoo spokeswoman Jennifer Tracey.

Their mother, Er Shun, who is on loan from China along with a male panda named Da Mao, is showing “excellent maternal instincts,” Tracey said, adding that the first 30 days of life are critical.

Chris Dutton, the zoo’s head of veterinary services, previously said allowing Er Shun to care for two cubs at a time would likely lead to the death of one due to neglect. There are two keepers from China in town to help with the cubs’ neonatal care.

Two cubs were born in Washington’s National Zoo in August and one died four days later. The zoo said the cubs’ mother didn’t take to the cub-swapping.

WITHROW, Alta.—Relatives and friends are trying to console a central Alberta farm family following the deaths of three girls in a grain-loading accident. RCMP say two of the girls suffocated in a truckload of canola seed near Withrow on Oct. 13 and a third died later in hospital.

Pastor Brian Allan of the Withrow Gospel Mission said people in the tiny community quickly went to the farm to help the parents and their son.

“They are obviously devastated,” Allan said. “There is just a deep sense of loss and sadness.” EMS officials said ambulance personnel determined the girls—two aged 11 and one aged 13— had been inside the truck while it was being filled from a hopper, but it was unclear how they became submerged underneath the seed.

Neighbours are planning to finish the harvest for the family.

TORONTO—A father, mother, and their son, all convicted of first-degree murder in the deaths of four members of their family, are asking Ontario’s highest court for new trials.

In documents filed with the Ontario Court of Appeal, Mohammad Shafia, his wife Tooba Yahya and their son Hamed argue, among other issues, that their trial judge should not have admitted evidence from an expert on so-called honour killings.

The three were convicted in January 2012 of four counts of first-degree murder in the deaths of daughters Zainab, 19, Sahar, 17, and Geeti, 13, and Mohammad Shafia’s first wife in a polygamous marriage, 52-year-old Rona Amir Mohammad.

The victims’ bodies were found on June 30, 2009, in a car at the bottom of a canal in Kingston, Ont. The trial judge described the killings as being motivated by the Shafias’ “twisted concept of honour.”