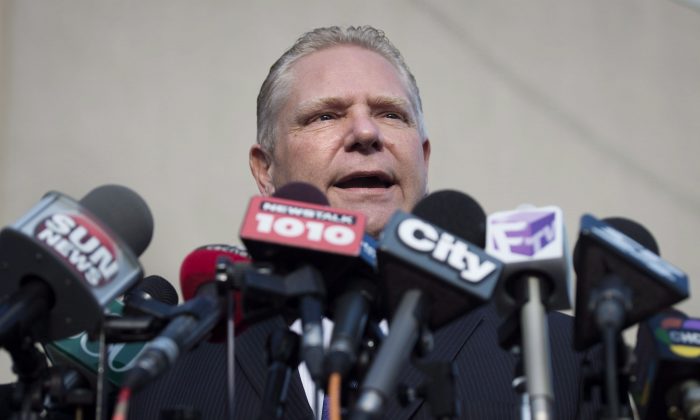 Doug Ford announces he will not seek the Ontario PC Leadership during a press conference in Toronto on Thursday, November 27, 2014. (The Canadian Press/Darren Calabrese)
Canada

TORONTO—The Conservative Party is only in the very earliest stage of launching a leadership race, but the names of contenders are already flying.

First out of the gate was an unofficial group promoting former Toronto city councillor Doug Ford as a leadership candidate. Ford delivered a 10-minute speech at a rally with outgoing leader Stephen Harper in Toronto on the weekend.

But the most repeated name in Conservative circles is former cabinet minister Jason Kenney, who is by far the most organized of any potential contender.

But the fact that the Liberals won such a decisive majority might dissuade some from considering a run, since the next Conservative leader would be in opposition for an indefinite amount of time.

An investigation earlier this year by the Alberta Energy Regulator found that between June 2013 and October 2014 the company had six pipeline incidents that caused loss or damage to public lands and potential environmental impact.

Between 2009 and late 2013, the company had 12 high-risk enforcement actions against it for non-compliance with regulations.

After its investigation, the energy regulator fined the company in July the maximum administrative penalty of $16,500 and issued four orders the company had to comply with.

The October 2013 spill of industrial waste water that led to the charges affected an area of more than 3.8 hectares.

WINNIPEG—Some of Canada’s top First Nations leaders say the federal election awoke a sleeping giant that the incoming Liberal government will have to contend with.

Voter turnout spiked up to 20 percent in some largely aboriginal ridings. Grand Chief Derek Nepinak of the Assembly of Manitoba Chiefs called it “a great day.” He said people have hope after years of what he called “purposeful oppression.”

“Mr. Harper, when he was prime minister, awoke a sleeping giant in our people. That giant is awake and the new Liberal majority government is going to have to deal with a giant in the indigenous people of these lands.”

Grand Chief Sheila North Wilson, who represents northern First Nations, says people will be looking for an inquiry to be called into missing and murdered aboriginal women within the first 100 days.

Kevin Hart, Manitoba regional chief with the Assembly of First Nations, says his people woke up with a sense of relief after the Liberal landslide and look forward to a new relationship with Ottawa.

VANCOUVER—British Columbia’s Supreme Court has sided with a group of homeless people embroiled in a dispute with the City of Abbotsford over their right to camp on public property.

A judge has rejected Abbotsford’s bid to shut down a homeless camp after a group calling itself the Drug War Survivors took the municipality to court, alleging the city’s regulations and harassment tactics violated their charter rights.

The judge also rejected the city’s request for a permanent injunction against homeless camping.

A city lawyer said the local homeless population chooses to sleep outside rather than at available shelter space. But David Wotherspoon of the Pivot Legal Society, an advocacy group representing the city’s homeless in this case, argued it’s wrong to blame his clients for their circumstances.

SAINT-RENE-DE-MATANE, Que.—Wildlife officials are investigating the shooting death of a moose that had become the quasi-mascot of a village in eastern Quebec.

The female had become very popular in recent months with locals and tourists who would approach her to feed her or take photos.

A passerby witnessed the shooting on Saturday morning and posted images on social media. Provincial police intervened to escort the two hunters in order to avoid incidents with locals.

Wildlife spokesman Jacques Nadeau says investigators need to determine where, how, and when the animal was killed as well as find out if they had permits. Nadeau says the hunting season was on when the shooting took place.

CALGARY—Ahead of the United Nations Climate Change Conference in Paris that begins at the end of November, a new study commissioned by environmental groups puts Canada in the middle of the pack among the Group of Seven industrial countries when it comes to dealing with coal-fired power plants.

The report, published Oct. 21 by the London-based climate think-tank E3G, shows Japan as the clear laggard because of its plans to add significant coal generating capacity.

The United States, meanwhile, is singled out for its aggressive efforts to reduce its coal dependency. Canada is praised for Ontario’s success in eliminating coal power plants and Alberta’s commitment to accelerate its phase-out of coal use.