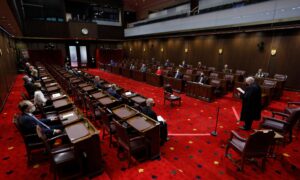 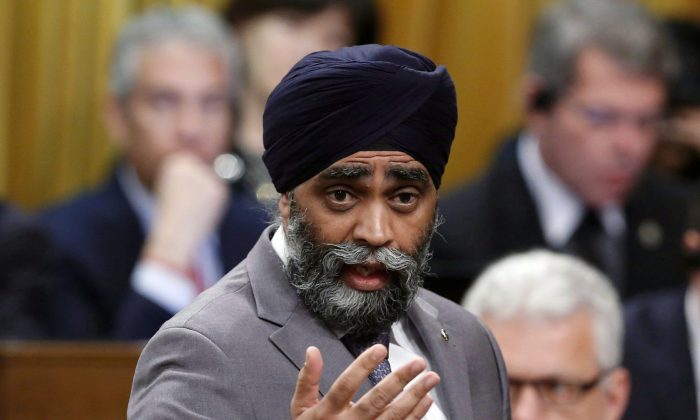 Defence Minister Harjit Sajjan during question period in the House of Commons on Feb. 9, 2017. (The Canadian Press/Fred Chartrand)
Canada

OTTAWA—The Liberal government is extending Canada’s military mission in Ukraine for another two years as it attempts to send a signal of continued solidarity with the eastern European country.

Canada first deployed about 200 troops to Ukraine in the summer of 2015 to help train government forces after Russia annexed Crimea and began supporting separatist forces in Ukraine’s Donbass region.

The mission had been set to expire at the end of March. But Defence Minister Harjit Sajjan and Foreign Affairs Minister Chrystia Freeland say Canadian troops will now remain in Ukraine until at least March 2019.

The decision is sure to be warmly welcomed by the Ukrainian government, which had publicly appealed for such an extension, as well as Canada’s large Ukrainian community.

Keith Archer, British Columbia’s chief electoral officer, says in a statement that the allegations include indirect political contributions and other potential contraventions of the Election Act.

Archer says the penalties for violating the financing provisions of the Election Act are a fine of not more than $10,000, imprisonment for a term of not longer than one year, or both.

The Globe and Mail reports lobbyists are routinely donating money to the B.C. Liberals on behalf of corporate and special interests.

Archer says the review will be open-ended and could be forwarded to the Criminal Justice Branch of the Justice Ministry.

EDMONTON—Alberta’s opposition parties say the government is losing the battle against opioids like fentanyl and must declare a public health emergency.

Members of all four opposition parties say the declaration would free up resources and coordinate the work of the multiple agencies involved.

But Associate Health Minister Brandy Payne says calling a public health emergency won’t help. She says the province already has the authority to make the necessary administrative changes to fight the rise in opioid addictions.

Jewish centres in Toronto, London among those receiving bomb threats

TORONTO—Jewish community centres in Toronto and London, Ont., were among several across North America that received bomb threats on March 7.

Police say the Miles Nadal Jewish Community Centre in Toronto was evacuated out of “an abundance of caution” in light of threats made in New York, Oregon, Wisconsin, Illinois, Florida, and Maryland.

The Centre for Israel and Jewish Affairs says a bomb threat made against the London Jewish Community Centre was the second it has received in the past two months. Both facilities reopened after police provided the all clear.

In the United States, the Anti-Defamation League and several Jewish community centres across the country got a round of bomb threats on March 7, including five in New York City.

NASSAU, Bahamas—A judge in the Bahamas has fined Canadian clothing manufacturer Peter Nygard $50,000 for violating a court order to stop dredging near his beachfront home.

Fred Smith, a lawyer for the environmental group Save the Bays, says in a statement that Supreme Court Justice Rhonda P. Bain found Nygard in contempt of court for violating her 2013 order to stop the dredging.

Smith says Nygard has nearly doubled the size of his property over the years by digging up sand and placing it along his beachfront. The judge gave Nygard until March 21 to pay the fine or be sent to prison for two weeks.