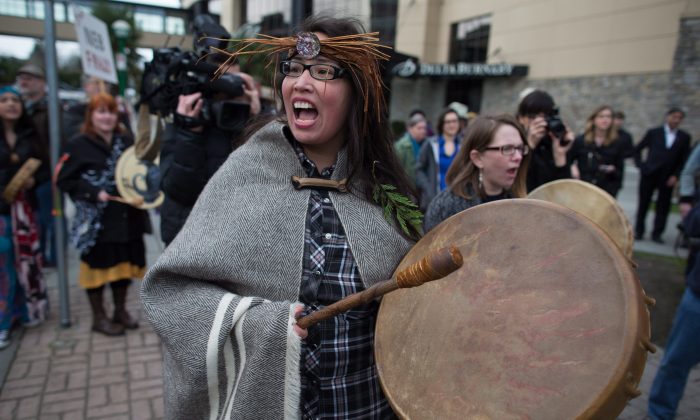 Audrey Siegl of the Musqueam First Nation chants and beats a drum during a protest outside National Energy Board hearings on the proposed Trans Mountain pipeline expansion in Burnaby, B.C., on Jan. 19, 2016. (THE CANADIAN PRESS/Darryl Dyck)
Canada

BURNABY, B.C.— As hearings began Jan. 19 on Kinder Morgan’s controversial proposal to triple the capacity of its Alberta-to-B.C. pipeline, activists urged Prime Minister Trudeau to immediately halt the review and implement changes he promised during the election campaign.

“You said no. Where are you?” asked Audrey Siegl of the Musqueam Indian Band, to a cheer from a crowd of protesters gathered outside a Burnaby hotel on Jan. 19.

Trudeau promised on the campaign trail in June to engage in a “new open process” for all pipelines. He said in August that would apply to existing pipelines and that the Trans Mountain process “needs to be redone.”

“After 10 years of the long, dark night of the Harper regime, for the first time there was reason to hope for change,” said Grand Chief Stewart Phillip of the Union of B.C. Indian Chiefs.

“We call on Prime Minister Justin Trudeau to follow through on those promises.”

The hearings will last for 10 days in B.C. and will wrap up in Calgary next month.

TORONTO—Postmedia is cutting approximately 90 jobs and merging newsrooms in four cities as Canada’s largest newspaper chain steps up plans to slash costs in the midst of mounting revenue losses.

The company owns two newspapers in each of the cities of Ottawa, Calgary, Edmonton, and Vancouver following its acquisition of Sun Media last year. Now those city papers will share a newsroom, although they’ll continue putting out different publications.

The two Calgary newspapers—the Calgary Sun and Calgary Herald—will share one editor, as will the Edmonton Journal and Edmonton Sun, Postmedia CEO Paul Godfrey said in a memo to staff. He said the Ottawa Citizen and Ottawa Sun will also have one editor.

In all, about 90 staff have been laid off. Paul Morse, president of Unifor Local 87-M, which represents some of the Ottawa employees who were let go, accused Postmedia of breaking its promise to continue operating two independent newspapers in each of those four markets.

OTTAWA—The Liberal government says it is winding down a controversial Conservative program of political-activity audits on charities.

Federal Revenue Minister Diane Lebouthillier says some 24 ongoing audits will continue in an effort to address what she called any serious deficiencies that are found. But six other charities previously targeted for examination won’t get audited, and five that previously had their charitable status revoked are being invited to appeal.

The former Conservative government committed a total of $13.4 million since 2012 to auditing groups that do charitable work, including a number of environmental and international aid organizations. The audit program prompted critics to accuse the government of launching a politically motivated witch hunt.

OTTAWA—Canada as a whole had its 19th consecutive year of warmer-than-average temperatures in 2015, but was nowhere near global record-shattering levels. On Jan. 20, NASA officially announced that 2015 was the warmest year on record globally.

Environment Canada says last year was the 11th warmest on record in this country. Overall, Canada’s average temperature from Jan. 1 to Dec. 31 was up 1.3 degrees Celsius from the historic average measured over the last 68 years.

However, that national average hides some massive regional temperature swings, including record-breaking averages across British Columbia and the third-warmest year on record for the southern Prairies.

Contrast that with Atlantic Canada, which was one of the very few regions on the planet that experienced a colder-than-average 2015. The Great Lakes region in central Canada was just 0.3 degrees C above average, recording its 28th warmest year of the last 68 years.

Age not a consideration as Tom Mulcair eyes 2019 election

MONTEBELLO, Que.—Tom Mulcair may be 17 years older than Justin Trudeau, but he’s not about to let his age keep him from leading the New Democrats into the 2019 election.

In an interview with The Canadian Press, the NDP leader says passion keeps people young and he remains very passionate about his work and what his party can accomplish.

Mulcair, who continues to face questions about his own political fate following last year’s election defeat, will be just shy of his 65th birthday the next time Canadians head to the polls.

Later this week, Mulcair is scheduled to meet with members of the NDP executive as the party continues to sift through the wreckage of the October election, which reduced it from front-runner to third-party status.

He will need to secure more than 50 percent support from delegates at the upcoming NDP convention in Edmonton in April to stay on as party boss.

Police say heavily armed officers interrupted a weekly meeting held by the Devils Ghosts in Val-David. The raid came after police had been watching the building for some time.

A provincial police spokeswoman says the meetings were held in part to divvy up drug territory as well as exchange drugs, cash, and weapons.

The five people arrested were released pending proceedings. They could face charges of weapons and drug possession as well infractions under the province’s liquor laws for operating a clandestine bar.