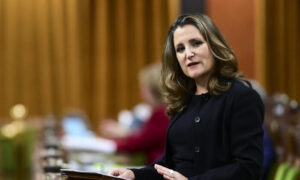 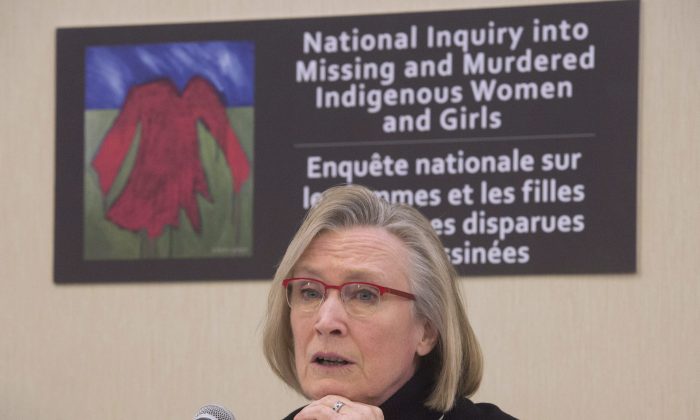 Minister of Indigenous and Northern Affairs Carolyn Bennett speaks during a news conference on the Missing and Murdered Indigenous Women and Girls inquiry in Ottawa on Feb. 15, 2016. (The Canadian Press/Adrian Wyld)
Canada

Inquiry must address spectrum of violence against native women: Activist

OTTAWA—An Ojibway activist is calling on the federal government to include domestic abuse in a forthcoming inquiry exploring the issue of missing and murdered aboriginal women.

Joan Jack, a retired lawyer who ran to lead the Assembly of First Nations in 2012, says the inquiry should include the entire spectrum of vulnerabilities aboriginal women face both on- and off-reserve.

The federal government is in the process of establishing the terms of reference for the inquiry.

Dawn Lavell-Harvard, president of the Native Women’s Association of Canada, says high levels of violence in many communities have been an open secret for decades. She says the inquiry will need to examine the complete picture in order to be effective.

OTTAWA—The Shipbuilding Association of Canada is hoping the Liberal government will change course when it comes to the renewal of the country’s navy and civilian fleets.

The industry group says that the current strategy, laid out in the former Harper government’s national shipbuilding program, is not working and has led to “unaffordable and untenable” programs.

Documents obtained by The Canadian Press show that the Liberal cabinet will be asked to put more money into the coast guard’s $144 million offshore oceanographic science vessel project in order to build the long-awaited ship.

The Liberals have also been warned that the navy’s frigate replacements are going to cost substantially more than the $26 billion that was earmarked eight years ago.

The recent discovery of two human feet encased in running shoes on a beach in Port Renfrew, B.C., brings to 14 the number of feet found in similar circumstances since 2007.

Coroner Barb McLintock says there are plausible, scientific explanations for the tragic findings—and the service wants to quell the myth that something nefarious is going on.

She says suicide and accidents have been determined as the cause of death for the people whose feet washed up, which naturally separated after a lengthy period in the ocean.

Experts met Feb. 17 in Iqaluit to try to get Inuit people speaking the same language.

Although there are only about 60,000 Inuit in Canada, they are divided between nine different dialects and several wildly varying writing systems.

Obed says many Inuit still prefer to write in syllabics, a system of symbols representing sounds that was developed by missionaries. But he says many others believe writing using the same alphabet as English is the way forward for the language.

CALGARY—A published report suggests a decision by the City of Calgary in 2011 to stop adding fluoride to its water supply has had a negative impact on children’s dental health.

Published Feb. 17 in the journal Community Dentistry and Oral Epidemiology, the report shows Calgary children have more than twice as many cavities as their counterparts in Edmonton, where fluoridation continues.

Researchers have also found that Calgary kids have more health issues with their baby teeth than those in the provincial capital.

The study’s lead author, Dr. Lindsay McLaren at the University of Calgary, says the findings suggest there are public health benefits to fluoridation.

Oland was sentenced last week to life in prison with no chance of parole for 10 years in the 2011 bludgeoning death of his father, Richard Oland.

Justice Marc Richard delivered his decision on Feb. 17 after hearing arguments from the defence and Crown last week. Oland showed no reaction while being led from court, as family members wept and hugged each other.