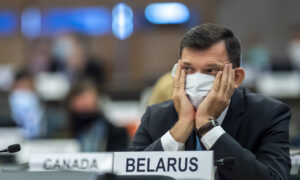 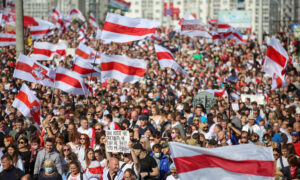 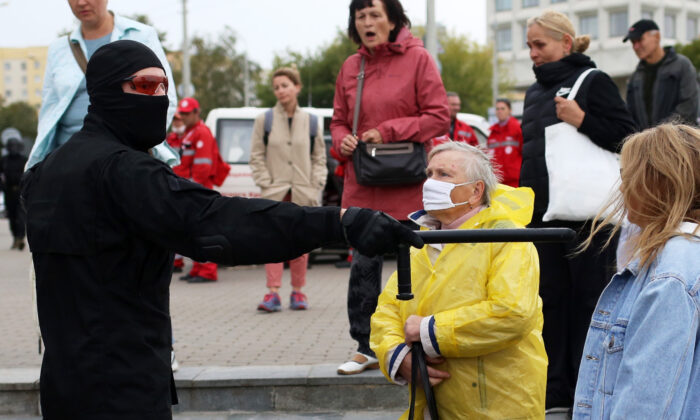 Women argue with a riot police officer during an opposition rally to protest the country's presidential inauguration in Minsk, Belarus, on Sept. 27, 2020. (TUT.BY/AFP via Getty Images)
Canada

Canada has imposed sanctions on Belarusian government officials, including the president, over election fraud and violence against protesters and opposition groups, Global Affairs Canada announced Tuesday.

Canada is imposing sanctions against Aleksandr Grigoryevich Lukashenko and 10 other officials for “fraudulent presidential elections in August 2020,” and conducting “a systematic campaign of repression and state-sponsored violence against public protests and the activities of opposition groups” under the Special Economic Act.

According to the act, any person in Canada and any Canadian outside Canada are prohibited from dealing in any property or providing financial or related services to the sanctioned officials. Sanctioned officials are also not allowed to enter Canada.

“Canada will not stand by silently as the Government of Belarus continues to commit systematic human rights violations and shows no indication of being genuinely committed to finding a negotiated solution with opposition groups,” Foreign affairs minister François-Philippe Champagne said in a press release on Tuesday.

The release said Canada “remains deeply concerned” by reports of ongoing human rights violations, including against freedom of the press and freedom of expression and peaceful assembly.

Besides Lukashenko, the list of those sanctioned includes Minister of Internal Affairs and Major General of Militia Yuri Khadzhimuratovich Karaev, and Commander of the Special Purpose Police Unit of Minsk Dmitry Vladimirovich Balaba.

More than 12,000 people have been arrested in mass protests in Belarus since Lukashenko won a landslide victory in the presidential election on Aug 9—denounced as rigged by opponents and Western observers.

In its notice about the sanctions, the federal government says the Belarusian government’s rights violations include “prolonged arbitrary detentions, brutality, intimidation, and the excessive use of force against peaceful protestors, including through the use of water cannons, flash grenades, rubber-coated bullets, tear gas, and the use of live ammunition. There are also credible allegations of the use of torture and sexual violence against those unjustly detained.”

All major opposition figures are now in jail or have fled.

Amnesty International’s Belarus 2019 report revealed that Lukashenko’s government violates freedom of expression, freedom of peaceful assembly, and freedom of association, among other infractions.

Canada’s decision to sanction those officials is in coordination with the United Kingdom and with the support of the Belarusian people, the government said.

The United States has not announced similar sanctions, though sources had said last week it was planning to coordinate the announcement with Canada and the U.K.

The European Union has also announced plans to sanction the Belarusian officials, although it has yet to finalize them.

Western countries have so far been cautious in responding to the events in Belarus, balancing sympathy for the pro-democracy movement with concern about provoking Russia, which has made clear it still supports Lukashenko, its close ally.

On Aug. 27, Russian leader Vladimir Putin told state television he had set up a police force to support Lukashenko.

“I told him Russia would fulfil all its obligations. Alexander Grigorivich (Lukashenko) asked me to create a reserve police force and I have done that. But we agreed this would not be used unless the situation got out of control.”

British Foreign Secretary Dominic Raab said in an interview on Sept. 29 that Lukashenko should pay the price for “the kind of human rights abuses that we’ve seen and the fraudulent approach to that election.”

“We can’t just have a situation where the likes of Alexander Lukashenko and frankly Vladimir Putin think that the human rights abuses and the rigging of that election can just pass without them being held to account,” Raab said.