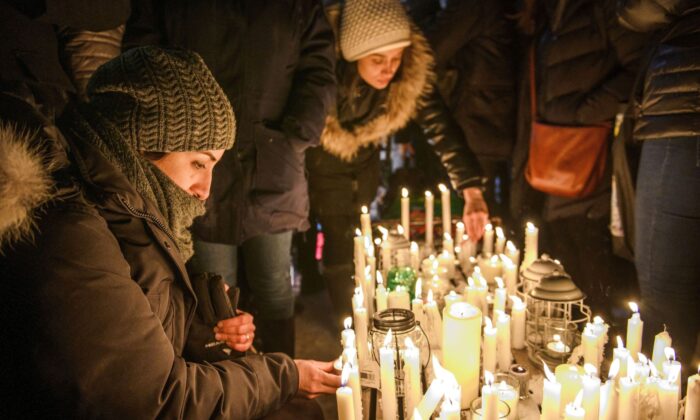 Members of Montreal's Iranian community attend a vigil in downtown Montreal on Jan. 9, 2020, to mourn victims of the Iranian air crash. Foreign Minister Francois-Philippe Champagne says he sees progress in persuading Iran to relinquish the black boxes from the Ukrainian jetliner that crashed near Tehran on Jan. 8. (The Canadian Press/Andrej Ivanov)
Canada

Trudeau joined the scheduled bilateral meeting between the foreign ministers to reinforce Canada’s demands that Iran allow a full and transparent investigation into how two Iranian missiles were fired at the civilian airplane causing it to crash moments after take-off from the Tehran airport on Jan. 8.

Champagne says he believes the fact Iran has not yet analyzed the contents of the flight data and cockpit voice recorders in more than a month proves they can’t do it.

He says he thinks today’s meeting moved the needle on progress to get Iran to ship the recorders to France which has the necessary equipment to do the work.

Champagne is also meeting with his Chinese counterpart this afternoon where he says he will once again request that China release two Canadians imprisoned there for more than a year as well as discuss the ongoing novel coronavirus outbreak.

Trudeau will address the Munich gathering this afternoon and urge global leaders to accept that a changing world requires more effort to bring economic prosperity for all.

Trudeau’s speech comes after he spent the past week in Africa and Kuwait, where he said several times that improving access to education and providing hope for young people will go a long way to keeping youth from turning to militancy.

The Munich gathering comes after what he called a tumultuous month for the globe, with the rise of tensions between the United States and Iran in early January, the plane crash in Iran, and the outbreak of the novel coronavirus, which has now killed more than 1,000 people and infected more than 42,000.

Both the Iran-U.S. relationship and the coronavirus will be high on the agenda for the three-day conference, though Trudeau will attend only today.

Tedros Adhanom Ghebreyesus, the World Health Organization director general, said this week the coronavirus, called COVID-19, is “public enemy No. 1,” with a potentially bigger impact than any act of terrorism.

Trudeau also met with a U.S. congressional delegation led by Republic Sen. Lindsey Graham this morning. Trudeau told Graham he is “very confident” the new North American trade deal with be ratified by Canada’s Parliament in the coming weeks.

He said he is confident he has the votes for it to pass in the minority Parliament.

Trudeau also met with the prime ministers of Niger and Albania and the president of Kazakhstan.

Trudeau is continuing Canada’s campaign for votes for a temporary seat on the powerful United Nations Security Council. His trip to Africa was planned in large part to help that campaign and he met more than a dozen African leaders over the last week.

Only one, President Macky Sall of Senegal, publicly pledged to support Canada as it competes with Norway and Ireland for two available seats.