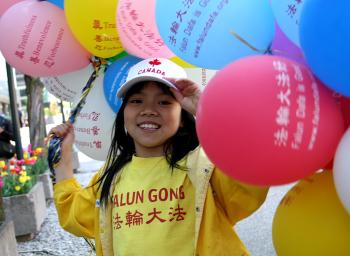 Celebration was in the air on Parliament Hill Wednesday as Falun Gong practitioners and supporters gathered to mark the 17th anniversary of the introduction of Falun Gong to the public on May 13, 1992. (Samira Bouaou/Epoch Times)
US

Falun Gong practitioners across Canada and around the world celebrated Falun Dafa Day on Wednesday, marking 17 years since Li Hongzhi introduced the meditation practice to the public on May 13, 1992.

Cities including Vancouver, Ottawa, and Toronto held festivities in honour of the practice that swept China in the 1990s and brought spiritual fulfillment and good health to millions.

A large pictorial display, dancing, singing, and exercise demonstrations took place in Vancouver’s Chinatown, while at Queen’s Park in Toronto there were speeches, a lion dance, and the sharing of cake. The Toronto Tian Guo marching band performed as well.

In Ottawa, that city’s Tian Guo band performed on Sparks Street, while testimonials on the benefits of the practice, singing in Chinese and English, a traditional Chinese Fan Dance, and exercise demonstrations were held on Parliament Hill.

In honour of the occasion, Prime Minister Stephen Harper sent a greeting that said in part: “As you celebrate the 17th anniversary of the introduction of Falun Dafa to the public, I commend the Falun Dafa Association of Canada for sharing your practices and traditions with the public. On behalf of the Government of Canada, I extend my best wishes for a joyous and memorable celebration.”

At the Ottawa event, former foreign diplomat and China expert Brian McAdam spoke of the guiding principles of Falun Gong.

“With Falun Gong, the words truth, forbearance, and compassion, of course, are the essence of all human values in the world, so a great deal is summed up in those three words,” he said.

“Ultimately, great ideas that have kept the world going have been very simple words.”

More than 100 million people in about 120 countries practice Falun Gong. The traditional Chinese self-improvement system leads to mental and physical well-being through gentle exercises, meditation, and the virtues of Truthfulness, Compassion, and Forbearance.

For the first few years after the introduction of Falun Gong, Li Hongzhi was granted several awards by Chinese governmental organizations and the practice spread widely, largely by word of mouth.

However, in July of 1999 China’s Communist Party launched an unlawful campaign of arrests, violence, and hate propaganda with the intent of “eradicating” the apolitical practice.

Mr. Walker noted that when Falun Dafa was introduced in 1992, it represented a practice that was peaceful and without political intent. He called on the Chinese authorities to abandon their flagrant abuses of human rights … and to grant the freedoms to which all law abiding people throughout our world are entitled.”

Joel Chipkar, director of the Falun Dafa Association of Canada, thanked “the hundreds of thousands of Canadians who have stood up to support Falun Gong by signing petitions and writing letters to urge our Canadian government to help stop the persecution.”

Foreign Affairs Minister Lawrence Cannon, currently on a visit to China, told The Epoch Times today that “Canada's concerns over human rights, including individual cases, are raised at senior levels at every appropriate opportunity.”

“We consistently call on the Chinese government to protect the rights to freedom of expression, association and spiritual belief of all Chinese citizens, including Falun Gong practitioners,” he said.

Each year in May, many city councils grant proclamations declaring the benefits that practising Falun Gong and living a healthy lifestyle can bring to a society.

Michel Bellemare, Acting Mayor of Ottawa, proclaimed May 13, 2009 as Falun Dafa Day in the City of Ottawa, and “in issuing this proclamation commend those who take part in these activities to bring healthier physical, mental, and spiritual conditions to themselves and others.”