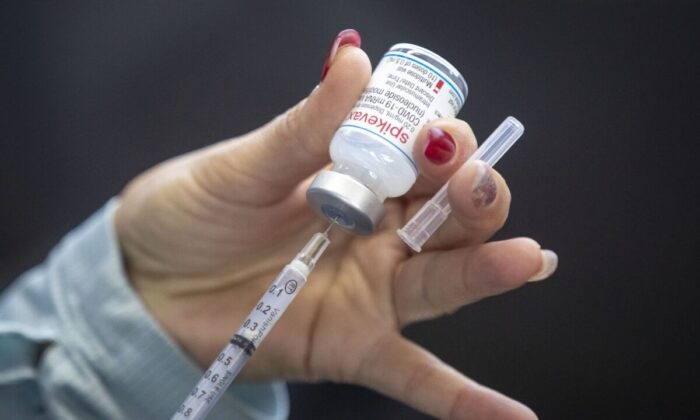 A person draws out Moderna vaccine during a drive through COVID-19 vaccine clinic at St. Lawrence College in Kingston, Ontario, on Jan. 2, 2022. (The Canadian Press/Lars Hagberg)
Canada

Health Canada says it has approved the use of Moderna’s COVID-19 vaccine for children as young as six months old.

In a July 14 statement, the federal health regulator announced it has authorized the use of Moderna’s Spikevax COVID-19 vaccine for children 6 months to 5 years of age, making Moderna the first pharmaceutical company permitted to provide their vaccine to Canada’s youngest kids.

The vaccine requires two doses given about four weeks apart.

The approval also means that nearly two million children in Canada could be eligible for the shots, depending on the availability of the vaccine determined by each province.

Health Canada previously said it received a submission from Pfizer-BioNTech on June 23, requesting authorization of its vaccine for children between six months and four years old. The submission is still under review.

“Moderna has indicated plans to study a booster dose for children under six years of age targeting the Omicron variant and the original strain of the virus,” she said.

Asked by a reporter if a COVID-19 shot will be developed for kids under 6 months of age, Dr. Marc Berthiaume, director of the bureau of medical sciences at Health Canada, says he isn’t aware of any such plans for the age group.

“At the present time, to my knowledge, there are no studies we’ve been informed of on vaccines for children under six months,” he said.

When asked if it’s worthwhile to have this cohort vaccinated eventually, Berthiaume says there may be a benefit “hypothetically.”

“In the absence of data, I can’t really say if there would be benefits. It would have to be studied. Hypothetically, there could be a benefit, but it might be different. There are all these factors to take into consideration.”