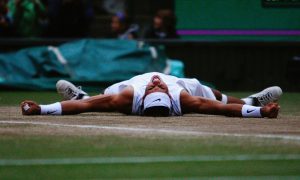 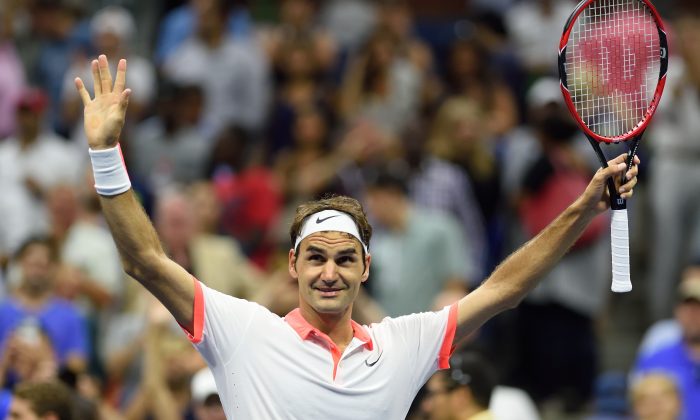 Roger Federer has won the US Open five times, but none since 2008. (Don Emmert/AFP/Getty Images)
Sports

Roger Federer’s 7–6 (0), 7–6 (6), 7–5 win over the last American male player left at the US Open—John Isner—was just what we’ve come to expect from the 34-year-old ageless wonder—graceful, yet dominant.

Maybe it’ll signal Federer’s return to the winner’s table at the US Open for the first time since 2008.

Yes, it took a pair of tie-breaking wins to go up two sets to love over Isner, but few can beat the hard-serving American without having to go to at least one or two tiebreakers—he’s one of the most difficult to break.

In fact, until Federer broke him to end the match, the 6-foot-10 Isner had yet to lose serve during the entire tournament.

The win now puts Federer into the US Open quarterfinals and makes the world’s most popular tennis player a popular choice to at least make the finals at Flushing—something he hasn’t done since 2009, when Juan Martín del Potro stopped his five-year reign as champion with a shocking 3–6, 7–6 (5), 4–6, 7–6 (4), 6–2 win.

Federer has just two major titles since that loss, and the last was more than three years ago (Wimbledon 2012).

Yet, Federer isn’t exactly on the decline.

The second-ranked Swiss Maestro has reinvented himself in his later years and the results keep getting better, despite an age that signals retirement for most.

Besides getting a slightly bigger racket in 2013 (from a 90-square-inch head to a 97), Federer brought in a new coach, Stefan Edberg, who helped him continue to transform his game. Now with a better serve and an aggressive net game, Federer is back in the top two of the ATP rankings—after being as low as eighth early last year.

Yet while he’s back near the top, Federer has just two major finals appearances the last two seasons to show for his improvement—both were at Wimbledon, and both ended with losses to the top-ranked Novak Djokovic.

Meanwhile, his former dominance at the US Open has yet to be revisited. Though he made the semifinals in 2010 and 2011, Djokovic stopped him both times and he hasn’t advanced further since then.

But with his recent stellar play (he beat Djokovic just last month), could this be the major tournament that sees Federer beat his latest nemesis—Djokovic—and win his record-extending 18th Grand Slam?

To get to the finals, Federer first has to go through 12th-seeded Richard Gasquet, who Federer owns a career 14–2 mark against, in the quarterfinals. After that, a semifinal meeting between either Stan Wawrinka (16–3) or Kevin Anderson (4–0) looms before a likely showdown with Djokovic, again.

That’s if Federer can make it that far. Last year, Federer’s run ended in the semis against Marin Cilic—a player Federer had previously never lost to.

To make the run this year, Federer needs to avoid those long, five-set matches and hope his recent play is enough to get past the world’s No. 1 player.