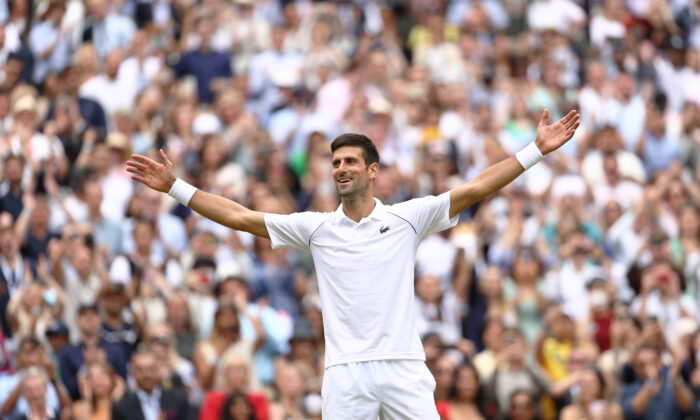 Novak Djokovic celebrates winning his men's Singles Final match against Matteo Berrettini of Italy on Day Thirteen of The Championships-Wimbledon 2021 at All England Lawn Tennis and Croquet Club in London on July 11, 2021. (Julian Finney/Getty Images)
Viewpoints

Can Djokovic Defeat Fauci at the Australian Open?

Some of us have dreamed about it and written about it, but these days, most acknowledge there’s only one GOAT (Greatest of All Time) in tennis, and his name is Novak Djokovic.

As of today, he’s been No. 1 in the world a record 349 weeks and will remain so, with the numbers mounting, at least until the conclusion of the 2022 Australian Open on Jan. 30, even if he doesn’t play in it. (More on that in a moment.)

Djokovic’s nearest competitor is Roger Federer at 310 weeks, but the great Federer’s playing days appear to be over, at least at anything close to the No. 1 level. Rafael Nadal, currently ranked sixth, is pretty far back at 196.

Djokovic holds winning records against both Federer and Nadal, and last month officially passed Pete Sampras, for years finishing No. 1 at seven. He also holds the record for the ATP Tour Masters 1000 tournaments, which are second only to the Grand Slams in importance, at 37, and is the only player to have won all nine of the ATP Masters—the Career Golden Masters—which he has done twice.

The sole claim remaining for those who won’t crown him GOAT, and it’s scant in my view, is that he’s tied with Nadal and Federer in Grand Slams, with 20 each.

That could have ended at the Australian Open, which Djokovic has won nine times and where he is the overwhelming favorite, only it now seems, at least as of this writing, that he won’t be there.

It’s about the vaccines.

It’s unclear if Djokovic is willing to take them, and the Australians, who, in recent months, have become—to the amazement of many extreme COVID militants—almost the world’s capital of lockdowns, are requiring them for all Open participants.

According to Tennis.com, 85 percent of the players and growing have taken the jab, but not, so far, Novak. And as of Nov. 28, his father, a cantankerous type, has opined to the world’s sports press that he won’t.

Djokovic, like many of us, is unhappy with mandates. He has said vaccinations and our health are a private matter and we should be free to do as we wish. But unlike many of us, he happens to be among the greatest athletes who ever lived. His opinion makes news.

If true, and he doesn’t go to Australia, he will be the unquestioned ghost in the room. The tournament will have a giant asterisk, absent its No. 1 seed. The winner won’t fully be one.

Djokovic, for his part, won’t be playing against the legendary Nadal, who is coming, or the No. 2, Russia’s Danil Medvedev, or the rising No. 3, Germany’s Sasha Zverev.

His opponents in spirit, if not in fact, will be Dr. Anthony Fauci, Joe Biden, Bill Gates, and the rest of the COVID vaccine true believers and instigators who have or are attempting to take over our lives and destroy our freedoms.

He will be brave for doing this. Not too many in his position would, with his No. 1 ranking and one of the world’s most famous sporting events to lose. It’s as if Tom Brady withdrew from a Super Bowl. (This may not seem so to Americans, but tennis is a far bigger international sport than our football. A better comparison might have been soccer’s Lionel Messi.)

There are those who don’t like Djokovic. They think he wants to be liked too much or is too much of a hothead. Part of that is because he was the latecomer, upsetting their heroes Roger and Rafa.

Part of this may have been, at times, Djokovic’s fault. He has an impetuous streak not all like. Last year, he arranged his own tour of the Balkans, and several players came down with COVID. And he accidentally hit a lineswoman with a tennis ball, costing him the 2020 U.S. Open.

On the other hand, the man is no dummy, often has interesting things to say about life and culture, and speaks as many languages as, possibly more than, Melania Trump.

But all of that seems rather petty now. We live at a time when governmental forces are turning not just the United States but much of the Western world and Asia into health care totalitarianisms.

It’s time for as many of us as possible to stand up to stop this. One of those of great importance doing this is Djokovic.

I never thought I’d say this because I am a tennis nut and a Djokovic fan since the days he did those hilarious imitations of Sharapova and Nadal, but I hope he doesn’t play in Melbourne.

Fauci must be beaten first. I hear he has a weak backhand (and forehand and serve).