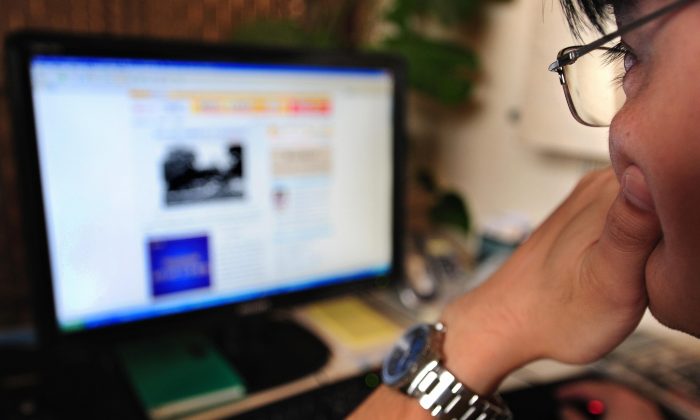 A man thinks while surfing the internet in Beijing on June 15, 2009. Whether China can develop the institutions to allow innovation will determine its economic future, says economist Ma Guangyuan. (Frederic J. Brown/AFP/Getty Images)
China

The following is an abridged version of remarks made by economist Ma Guangyuan to Chinese television and later reproduced widely online.

Professor Tyler Cowen of George Mason University stated in his book “Average Is Over: Powering America Beyond the Age of the Great Stagnation” that the U.S. economy entered a stage of stagnation in the mid-1970s. He said there are two reasons for stagnation: low-hanging fruit and the United States reaching a historical technological plateau. He thinks technological innovations, including electricity, automobiles, trains, airplanes, typewriters, cameras, and medical equipment were all accomplished before 1940. Since then, other than computers and the Internet, not much was invented.

This is actually also a description of China’s economy.

China’s economy is stalling as it has lost all traditional motive forces. In my own words, the six-horse wagons—manufacturing, the demographic dividend, investment, real estate, export, and consumption—are exhausted and unsustainable. In the absence of innovation, China’s economy is facing the risk of falling off a cliff.

Without any doubt, technological innovation is the only remaining hope. However, implementing innovation is not as easy as it sounds. With the economy in decline, what are the chances of enterprises investing in innovation?

In the mid-1990s, Simon Kuznets raised the concept of modern economic growth. Kuznets states that Europe’s economic growth before the Industrial Revolution was lower than 0.1 percent. At that rate, it would take 700 years for material wealth to double!

Actually, in the 100 years after the start of the industrial revolution, the average annual economic growth surged to 1 percent or more, taking 70 years to double material wealth.

The economic surge in Europe was triggered by Britain’s Industrial Revolution. Many people have been asking why Britain rather than another country? Technically speaking, Europe, including Britain, was far behind ancient China in terms of advanced science and technology.

Before the start of the Industrial Revolution, Britain had already established a modern system of finance, property rights, and patent rights.

The Magna Carta in 1215 limited the power of the crown; the earliest patent system was founded in 1624; the world’s first central bank, the Bank of England, was established in 1694; and the London Stock Exchange was founded in 1773. These systems all served to protect intellectual property rights and provided a financial environment for the development of technologies that have emerged in Britain.

North’s interpretation was confirmed by renowned economist Sir John Richard Hicks. Hicks posits that the British Industrial Revolution was essentially a financial revolution rather than a technological one. The reason is, those key technologies were mostly developed before the Industrial Revolution. Only after the modern security system, stock market, and patent protection system were established, did technology become the key element in improving productivity.

Based on this logic, we must abandon our misconceived beliefs and efforts that call for innovation-driven strategies, which only emphasize technology and ignore the need for changes of system and institutions.

Technology is important, but if there is no change to the system, finance, and culture, technology cannot sustain the growth momentum. For the countries with technological power that achieved rapid economic growth in history, the root cause was not technology itself, but rather the support of their institutional, cultural, and financial systems.

The greatest significance of the proposal set forth by China’s General Office of the State Council is the overall raising of systemic breakthroughs in terms of institutional mechanisms. This is equivalent to the construction of a system that supports an innovation-oriented country and to create an environment. Technology is like eggs; only eggs can hatch chicks. But without the right environment, good eggs will become rotten eggs.

I have repeatedly stated in many speeches that the key barrier for China to motivate more innovation is definitely not at the technological level. With respect to technical innovation, China already has the base of an innovation-oriented country. China is No. 1 in the world in terms of patent application, and the number one exporter of high-tech products.

Although China is still lacking in originality and some critical technical areas, China’s weakness as a truly innovative country remains in its environment, institutions, and mechanisms. For example: China has not yet formed an environment that encourages innovation. China is relatively weak in the protection of intellectual property. China lacks the inclusion of innovation in its culture. China’s education system contains many contradictions to innovation. China’s financial system is not able to provide real support to innovation. We can say that we have not really built up a system that supports China as an innovation economy. We need more genuine breakthroughs in the system and in the institutional mechanisms.

Cheng Siwei, the famed economist and chemist, once said, “Innovation is the source of the dividend of reform. It is the fundamental problem.” He is absolutely right.

Ma Guangyuan is a well-known independent economist in China. He is the vice director of China National Democratic Construction Association Central Economic Committee and a financial commentator for CCTV. He is also a columnist for Financial Times Chinese, Southern Weekly, the Economic Observer as well as many other Chinese media.