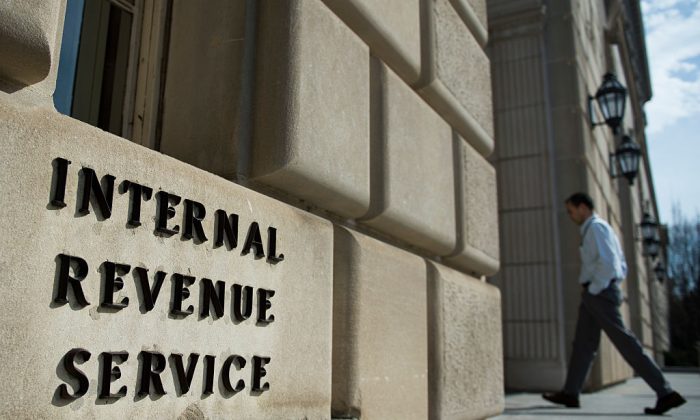 Can a GOP Congress Stop the New IRS Gestapo?

Since the Mar-a-Lago raid, Republican leadership has been bloviating at every opportunity about how they will “investigate” crimes of the Democratic Party and their three-letter agency allies like The Erinyes should the GOP win back Congress, as widely predicted, in November.

But investigations mostly end up as just more bloviating accompanied, at best, by useless recommendations for action by a Justice Department that’s as likely to follow them as I am to be writing my next column from Alpha Centauri.

Something has to be done that’s concrete. Congressional investigations, necessary as they may be, add up to little more than virtue-signaling—in this case from the right—and can create the illusion that something has happened when it hasn’t. That might be useful for the politicians involved but means little to the rest of us.

How about some actual actions, difficult as that may be? How about exercising the famous congressional “power of the purse.” Yes, it may be too late, but technicalities like that rarely stop our adversaries.

Other than Mar-a-Lago and the Jan. 6 committee, the latest—and ultimately quite possibly the biggest—elephant in the room is the legislation that’s nearing passage with a name straight out of Orwell’s Ministry of Truth: the Inflation Reduction Act.

Forget for a moment all the ridiculous “green” featherbedding in this legislation. The administration’s version of “the science” is about as scientific as the Greek myths, possibly less. It’s the same pro forma collection of hand-outs to the usual pseudo-environmental suspects that ultimately add up to more orders for, frequently defective, Chinese solar collectors.

That’s bad enough but the real danger in this legislation is the massive infusion of cash ($80 billion) into the IRS, yielding an extraordinary expansion (an army of 87,000 new agents) and the literal weaponization of the tax agency.

The weaponization part was already demonstrated by the help wanted advertisement for “Special Agents” that appeared on the three-letter agency’s website that appeared almost simultaneously with the legislation:

•  Adhere to the highest standards of conduct, especially in maintaining honesty and integrity.
•  Work a minimum of 50 hours per week, which may include irregular hours, and be on-call 24/7, including holidays and weekends.
•  Maintain a level of fitness necessary to effectively respond to life-threatening situations on the job.
•  Carry a firearm and be willing to use deadly force, if necessary.
•  Be willing and able to participate in arrests, execution of search warrants, and other dangerous assignments.”

Deadly force? What business the IRS has in such activities is, to say the least, unclear when there are numerous law enforcement agencies already in place that could handle such situations. It’s as if a new Gestapo were being formed: native-grown brownshirts. Wasn’t the FBI enough? It’s beyond un-American. It’s purely fascistic.

We can assume, however, that these armed special agents will be a minority among the new 87,000 employees, hopefully anyway. What will the others do? Who will they be investigating in a more non-violent manner that could give years of anguish to any subject, not to mention incur them significant legal and accounting fees, no matter how honest the audit subject might be? (For another Greek reference, even Diogenes himself, under this new regime, could be trapped in an audit process that goes on and on without resolution, destroying his life.)

Naturally, conservatives are alarmed, even terrified, that the IRS could be so politicized. Treasury Secretary Janet Yellen has been rushed into the fray to reassure us, through a “directive”:

“Specifically, I direct that any additional resources—including any new personnel or auditors that are hired—shall not be used to increase the share of small business or households below the $400,000 threshold that are audited relative to historical levels,” she said.

Would Yellen, the woman who told us inflation was transitory and that there was no recession, lie to you? Or if she has issued such a “directive,” does it have legal force? And what are these historical levels anyway? What part of history is she referring to?

I have a two-word of rebuttal to Ms. Yellen: Lois Lerner.

From the Daily Mail:

“After nearly two years of jockeying with Congress over the IRS’s history of discriminating against conservative nonprofit groups, former official Lois Lerner won’t be charged with a crime for defying a congressional subpoena and refusing to answer questions.

“U.S. Attorney Ronald Machen, on his last day in office, told House Speaker John Boehner in a seven-page letter that Lerner could wrap herself in the U.S. Constitution’s Fifth Amendment, even though she offered a self-serving opening statement before clamming up during a May 22, 2013, hearing.”

With 87,000 new employees, almost all avid statists—who else would join the agency—we are headed for déjà vu all over again, i.e., Lerner’s “historical level,” only worse in a yet more divided time. (As someone once said, “Personnel is policy.”)

So to Republicans in the House and Senate, speechify all you wish, but start really acting now, being concrete, even before you might have majorities. Get with the smartest conservative tax lawyers you can find and figure out some way to put a halt to as much of this as possible. Throw a wrench in the machine.