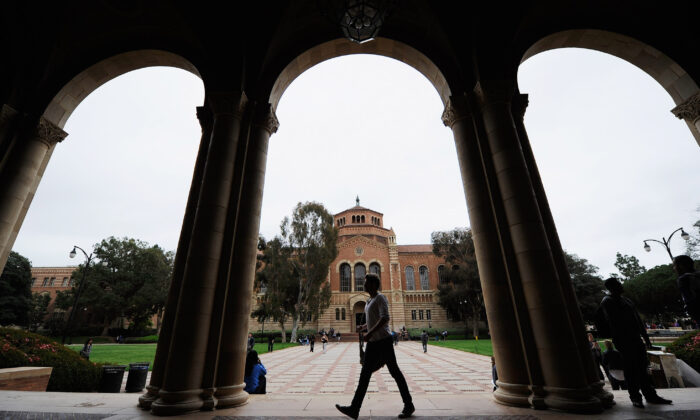 A student walks near Royce Hall on the campus of UCLA in Los Angeles, Calif., on April 23, 2012. (Kevork Djansezian/Getty Images)
Viewpoints

Campus Officials on the Precipice for Arbitrary Sexual Assault Rulings

Campus administrators running America’s kangaroo courts have spent years running roughshod over the legal rights of young men accused of sexual assault. Now they’ve learnt they might be in the firing line when it comes to legal action against the universities.

A series of judicial decisions has issued a warning to justice warriors who use their positions as campus officials to throw young men under the bus. One example involved officials from Lincoln-Sudbury High School, in Massachusetts, who weren’t happy when an investigation into sexual assault allegations reached inconclusive results and rather than put this on the record, they revised the report and inserted a guilty finding.

Campus administrators can no longer assume they can’t be sued for such biased behaviour. Courts are now saying that officials who undermine due process place themselves at risk of the loss of qualified immunity.

The recent legal judgements are part of a welcome trend for judges to disallow immunity defences in these Title IX lawsuits, leaving campus officials thoroughly exposed.

Australia’s kangaroo courts are run by the Sexual Assault and Sexual Harassment (SASH) committees, who have license to derail the education of accused young men. But some of these officials are now wondering if they might also face legal risks from playing God in these quasi-judicial decision-making bodies.

In the Firing Line

Earlier this year, an article appeared in a publication called Campus Review entitled ‘Lessons From the Sexual assault and Harassment Committee: What Could Go Wrong?’

It was written by Alan Manly, the CEO of Group Colleges Australia, representing the private higher education colleges, and Emeritus Prof. Greg Whateley, the deputy vice chancellor of the group.

They wrote of a case involving a doctor from overseas who was helped by Campus Justice lawyers and achieved a settlement from a major university. The authors point out that in that case, the student moved on—the doctor is now studying for graduate medical entry to work in Australia.

But Manly and Whateley ask what if that student had been well-funded and bent on revenge, suggesting then he might have chosen to target the SASH committee for the appalling way he had been treated.

They have great fun spelling out what that might mean for individual committee members:

“Good practice would suggest that all committee members should seek their own legal advice … Committee members would have to pay for this legal advice. The affidavits would be done and then they would come back for more details, more evidence to support your assertion.

“More time, more worry, more personal legal expense, and you haven’t got to court yet.

“A few sleepless nights will be had by committee members.”

Manly and Whateley first plant the seed of doubt, and then in June, follow up with another article clearly aimed once again at the SASH committees.

This time they focused on the most famous case in this domain, involving a medical student at the University of Queensland (UQ) who went to the Supreme Court and successfully argued that universities had no jurisdiction to determine sexual assault cases (pdf).

Judge Ann Lyons said that the university could not adjudicate criminal matters and was very critical of SASH procedures.

Manly and Whateley point out that the SASH committee were named as the second respondent in this case, so when the university lost and had to pay the accused’s costs as well as their own, they were also potentially liable.

“The feature that may be keeping some members of the Quasi-Judiciary Committee awake at night could well be the costs for a hearing in a Supreme Court with lawyers and barristers on full fee,” say the authors.

The Campus Review authors are clearly stirring the pot, particularly given that such committees are likely to have “vicarious liability,” which means the university carries the legal can.

But senior lawyers advise me that failure to provide natural justice for the accused person could create a personal liability that won’t always be indemnified by the university. And it is hardly good for career advancement to be the cause of an expensive lawsuit attracting adverse media attention for your employer.

Turn of the Tide

UQ appealed the Supreme Court decision and won with the judgement stating universities are allowed to deal with sexual misconduct after an offence is proven in criminal court. But it came with a warning for the universities that they can expect to have their disciplinary decisions subject to judicial scrutiny if they fail to ensure their internal processes are suitable—meaning they must ensure procedural fairness.

The university was clearly not happy despite this apparent win. The whole saga probably set them back $200,000 (US$140,000) to $300,000 in legal costs, plus they had attracted considerable negative publicity over the case.

Big wigs at UQ sprang into action and conducted a review of the management of sexual misconduct cases, which decided to rein in the SASH committee and is now relegated to the role of an advisory committee reporting to the vice chancellor.

The speculation in Campus Review about legal liability for SASH members certainly doesn’t hurt, and following a number of recent expensive legal cases and significant compensation payouts, the fervor for witch-hunts against accused male students may be starting to wane.

There are critical legal issues which still deserve a public airing, including:

A criminal conviction is not a bar to studying at university or being granted a degree. How then can universities lawfully withhold degrees from students accused or even convicted of sexual assault?

The only misconduct that should disbar a person from their degree is plagiarism or other misbehaviour impinging on their studies.

The entire regulatory apparatus is justified by creating a safe environment of students—but by providing “safety” for one group of students, universities have jeopardized the safety of accused students by using blatantly unfair procedures that deny their legal rights.

The tide is turning, and sooner or later, Australia is going to see a university being held accountable for these witch-hunts. When that time comes—and it’s a question of when, not if—universities will pay a heavy price.