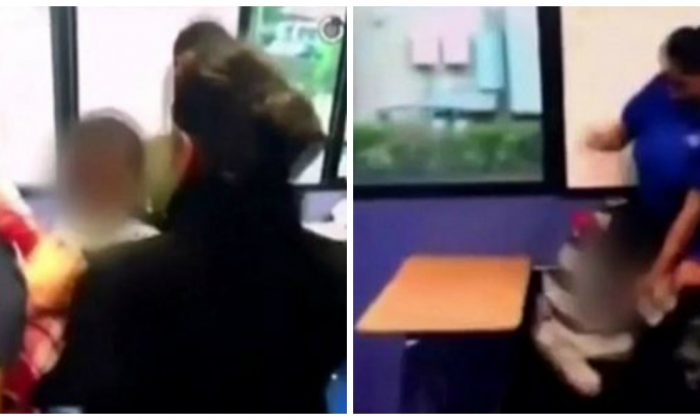 Screenshots from the video, which has been circulating online.
Crime and Incidents

A California teacher’s aide was arrested after a video surfaced showing her smacking a special-needs student in the face.

Kamaljot Kaur, 26, was wrestling with the student along with another teacher when she smacked the student, a 9-year-old Oakland boy.

The incident took place on Tuesday at Tobinworld II, a school for special education in Antioch.

The video went viral after being posted on Facebook, reported CBS.

After police officers interviewed staff members, other students, and the victim, they decided that a felony child abuse had occurred and took Kaur into custody.

This is the video from #TobinWorld School in Antioch that shows a young student being punched by teacher aide. pic.twitter.com/sphoA2y09U

Tim Sickler, a parent of one of the students at the school, said that before he placed his kid at Tobinworld he made sure staff members were trained in CPI, or crisis prevention and intervention. But Kaur was not displaying that training.

“They didn’t do any of that. I’m a former instructor of CPI and what they did… that’s thugs,” said Sickler as he shook his head. “That’s something that happens out on the street when you get jumped. So those aides not only need to be terminated, but they need to go to jail.”

Kaur and the other staff member in the video have both been fired.

Tobinworld founder and executive director Judi Weber said she is “devastated” by what happened.

“Maybe she was trying to get a child under control, but that’s not how it is done,” Weber said. “I have been doing this for 30 years. I am the mother of an autistic child. We give our employees plenty of training and resources. I don’t want to say anymore because the case is being investigated.”

But public records obtained by ABC show that over a five year period, from 2008 to 2014, there were 35 reported episodes of violence between staff and students at three Tobinworld locations in Antioch.

Lina Azizi made one of the reports in 2013 after her then-15-year-old autistic son Edreese came home with bruises and scrapes.

“The police came and took pictures and a report,” Azizi said. “He was pushed down on the floor and he had marks on his body, on his face and he was crying really badly.”