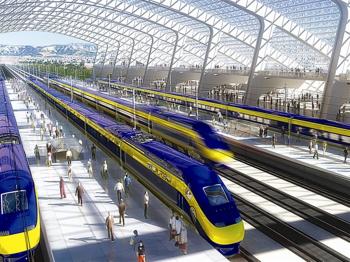 Passengers wait to board high-speed bullet trains. (Computer rendition courtesy of NC3D)
US

By Ivan Velinov
Print
SAN FRANCISCO—Billions of dollars in government subsidies have unified federal, state, and local officials in a bid to keep the California high-speed rail plan moving.

Construction of the 800-mile high-speed rail network capable of moving people and goods across the state at speeds of up to 220 mph, similar to the bullet trains in Japan and Europe, is estimated to cost between $30 and $35 billion dollars according to the California High-Speed Rail Authority.

“Labor, business, environmental, and government leaders across the state are united in support of this historic proposal because it would lay the foundation for California's 21st century transportation system, create nearly 130,000 jobs, and improve our mobility, quality of life, and environment,” said Gov. Schwarzenegger.

Pledging a dollar-for-dollar match from state and local funds and the high-speed rail bond passed by California voters in 2008, the state’s application would generate nearly $10 billion in investments.

The federal stimulus package passed in February by President Obama’s administration allocated $8 billion as the first step toward building a national high-speed rail network which would resemble the long-term effort in building the interstate highway system 50 years ago.

More than $1 billion is budgeted each year over the next five years.

The U.S. Department of Transportation announced in July that it received an overwhelming number of requests from state and local governments seeking financing for high-speed rail systems.

Among the areas vying for a slice of nearly $8 billion in government stimulus are Virginia, Washington D.C., and North Carolina. The Midwest High Speed Rail Association has also proposed a high-speed rail line that would link Chicago to St. Louis carrying passengers at 220 mph; the rail was estimated to cost as much as $12 billion.

But according to officials, the grants will be distributed under strict criteria among applicant states, interstate compacts, public agencies having responsibility for providing high-speed rail service, and Amtrak for capital projects associated with inter-city passenger rail services reasonably expected to reach speeds of at least 110 mph.

California is proposing the only true high-speed train capable of more than 200 mph, according to Gov. Schwarzenegger’s office, and is further along in planning than any other similar project in the nation. Planning and engineering work has been ongoing for more than 13 years.

Local opponents of the California high-speed rail fear that the bullet-train project would cut through urban areas along the route, meaning that local residents and businesses alike might experience a drop in property values and have to endure noise and construction coupled with traffic congestion as the system is built.

Taxpayers groups also said in the past that the state cannot afford high-speed rail, arguing that the project would push California into an even bigger financial hole.

Based on U.S. Department of Transportation figures, high-speed rail transportation only consumes a tenth of the fuel used by car travel and could create up to 170,000 permanent jobs.