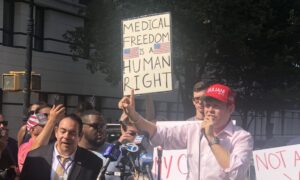 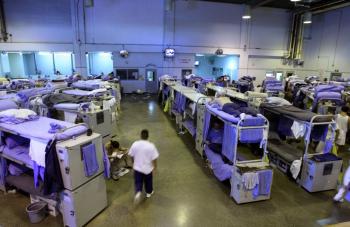 An inmate at the Mule Creek State Prison walks near his bunk bed in a gymnasium that was modified to house prisoners in Ione, California. (Justin Sullivan/Getty Images)
US

Ivan Velinov
View profile
Follow
biggersmaller
Print
A federal panel initiated by three judges ordered the state of California on Tuesday to reduce population in its overcrowded prison system, and correct what the panel called “woefully and constitutionally inadequate” health care, and “cruel and unusual punishment” of prisoners.

The judges ruled that there is “overwhelming” evidence that overcrowding of the state network of prisons is the primary reason for the lack of appropriate medical and mental health care, and ordered the state to reduce its prison population by over 40,000 prisoners within the next two to three years.

The ruling affects the California’s 33 adult prisons, most of which now operate at double capacity with about 150,000 inmates housed in facilities designed to hold about 80,000 people.

The federal court pointed out that evidence during a trial indicated that inmate numbers could be reduced without endangering public safety through procedures such as early-release proposals for good behavior, diversion of low-risk offenders and technical parole violators.

In two protracted civil rights lawsuits in the state, inmates claimed that medical and mental health care was so inadequate it violated the Eight Amendment of the Constitution which prohibits cruel and unusual punishment.

California Governor Schwarzenegger proposed a prison construction plan as a way to reduce prison crowding. Many of the inmates are still contained in converted sports facilities furnished with bunk beds. And according to the civil rights lawsuits, that exposes inmates to infectious diseases in a broken system suffering a shortage of medical personnel in which inmates were dying of avoidable conditions at the rate of one per week.

Gov. Schwarzenegger postponed a deal in June that would have provided $3 billion to build two prison hospitals and renovate other facilities to create 5,000 beds for ill inmates. An earlier plan was for the state to pay $8 billion for 10,000 prison hospital beds, but as the state deficits grew and political pressures intensified California lawmakers shifted their position.

Last month, during a heated debate over how to close a $26 billion budget gap, California lawmakers trimmed $1.2 billion in spending to the state prison network, visualizing parole overhaul and early releases of inmates.

Law-and-order advocates disputed the lawmakers’ decision fearing that any release of a large number of prisoners would endanger public safety.

In February, during a preliminary hearing, the three judges advised the state to reduce the prison population by a third meaning as many as about 50,000 prisoners have to be moved out of state facilities in the next three-year period.

The judges wrote, "The convergence of tough-on-crime policies and an unwillingness to expend the necessary funds to support the population growth has brought California's prisons to the breaking point."