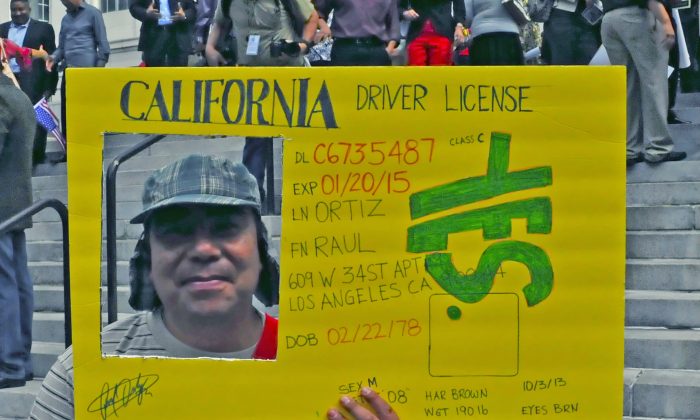 Raul Ortiz (alias) danced on the steps for joy, celebrating the passage of AB-60 with other undocumented immigrants while holding his “soon to be license” with his live photo, in Los Angeles, Calif., Oct. 3. (Robin Kemker/The Epoch Times)
US

Granting undocumented immigrants driver’s licenses was first brought into the law on Oct. 7, 2003, when California Governor Gray Davis signed Assembly Bill AB-60 into law. As a result, because of his almost borderless vision of Mexico and California, including immigration, Governor Davis became the only California governor to be successfully recalled by voters in 2003, and only the second in the country.

The 2003 AB-60 bill was also repealed in December 2003 and has been brought up in the legislature many times since then. Governor Schwarzenegger vetoed it four times.

The current author and sponsor of AB-60, Democratic Assemblyman Luis Alejo of Salinas, was relieved when the state Assembly approved the bill on a 55–19 vote late in the evening, after the Senate passed it earlier on the same evening in a 28–8 vote.

The basis for this new law is to make available driver training and insurance coverage.

De Leon added that 10 other states allow undocumented immigrants to apply for driver’s licenses. He said it was time this happened in California.

“This bill will enable millions of people to get to work safely and legally,” Governor Jerry Brown said in his statement. “Hopefully, it will send a message to Washington that immigration reform is long past due.”

When asked what this event meant for him, Ortiz said, “For many years, we have been driving vehicles in fear of being pulled over by police, since we could not obtain a valid driver’s license. If we were pulled over, because we are undocumented, they would impound our car and deport us,” said Ortiz. “I drove without a license for 11 years.”

This new law allows undocumented drivers to have driver training, obtain auto insurance, and carry an acceptable photo ID, which was not possible in the past, causing significant burdens and stress on families and society.

In a statement, Governor Brown said, “While Washington waffles on immigration, California’s forging ahead.

Governor Brown was celebrated throughout the weekend activities as he signed into law 10 bills that would positively affect immigrants and their families.

On Saturday, Oct. 5, a parade along Western Avenue in Hollywood was held to bring national attention to the need for immigration reforms.

Over 1,000 participants lined up carrying signs calling on Congress to take action on reform. It was reported that 165 such activities were taking place across the country on this weekend with thousands of participants.

The bulk of support for undocumented immigrants comes from various faith-based organizations.

Rev. Walter Contreras, representing the Latino Evangelical Coalition, said, “Well for many years, we’ve been fighting this good cause … a moral cause.

“We have lots of clergy and churches participating like never before and we are very much committed to ask the Congress to make a decision now, and not in two years from now … we are going to send prayers to Congress.”

Congress Must Be Accountable for Change

The clergy are expecting a national response on behalf of the people who are being harassed as undocumented immigrants.

“It’s time to give an accountability of so many years of pain, and them not doing what they’re supposed to be doing,” said Contreras.

Few outside of the immigration communities appreciate what the churches are dealing with: the extreme emotional conditions caused by the current immigrant policies

“More than 40 percent of almost all [churchgoers in] the Hispanic churches in Los Angeles are undocumented. So we carry a big burden: their fear, people living in the shadows, having to do funerals, having to comfort families who’ve been separated, it’s still churches that are one of the most trusted institutions in the country,” said Contreras.

Congress’s inaction is causing a growing rift between the public and their Congressional representatives. Latinos feel the Republican Party in particular has failed them in this regard.

“We need the Congress to really take this seriously,” said Contreras. “You can take everything away from them, but you’re not going to take away their hope and faith. So we’re going to be praying with our eyes open. So we can see God and we can send prayers and see what Congress is doing because it’s time for national immigration reform now.”