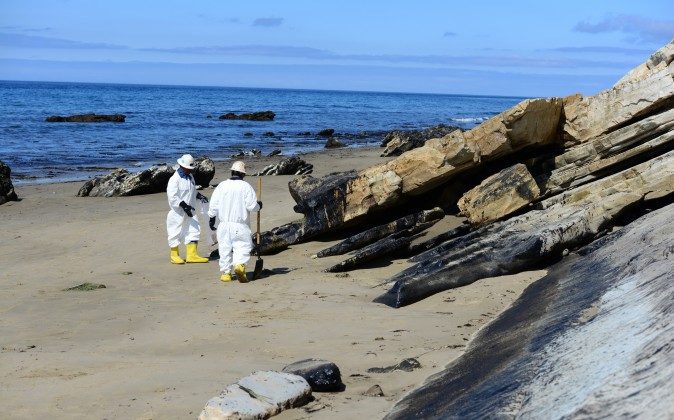 In this Saturday, May 23, 2015 photo released by the U.S. Coast Guard, two cleanup crew members work to remove oil from the sand along a portion of soiled coastline near Refugio State Beach, north of Goleta, Calif. (Chief Petty Officer David Mosley/U.S. Coast Guard via AP)
US

GOLETA, Calif. — The cost of cleaning up the oil spill that fouled beaches last month on the California coast has reached $69 million so far, an official of the pipeline company said Wednesday.

Costs are running at $3 million a day, and there is no timetable for when the cleanup will be complete, Plains All American Pipeline’s on-scene coordinator, Patrick Hodgins, told The Associated Press.

About 76 percent of 97 miles of coastline—mostly sandy beaches—have been cleared of oil. Crews are using tools to scrape oil off rocks and cobble beaches.

The May 19 spill occurred after an onshore pipeline operated by Texas-based Plains All American ruptured, leaking up to 101,000 gallons of crude.

About 21,000 gallons entered a storm drain and washed out to the Pacific Ocean off Santa Barbara County.

The spill was smaller than the 1969 oil platform blowout off Santa Barbara County that blackened miles of coastline and killed thousands of shorebirds and other wildlife.

The cause of last month’s break has not been determined, but documents released by federal regulators after the spill said testing conducted in early May found extensive external corrosion along some sections of the pipeline.