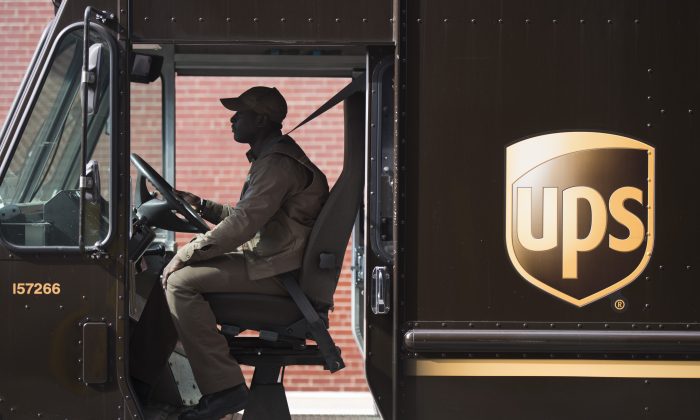 A UPS driver departs the UPS facility on West 43rd street May 9, 2017 in New York, before a news conference. (DON EMMERT/AFP/Getty Images)
Crime and Incidents

A UPS driver managed to deliver a Twitter storm after making a “clever” decision that ended up trapping the recipient.

Jessie Lawrence from San Francisco, California said that he got trapped in his apartment after a UPS delivery worker left a package wedged under his door handle, according to his Twitter.

Lawrence tweeted about the unusual and situation on Sunday, Sep. 3., saying he had to call maintenance for help so that he could get out of his apartment.

“Hey @UPS, your driver left this package under our door knob like this and trapped us in our apartment. Had to call maintenance to get out,” he tweeted.

He posted a photo along with the tweet showing what the delivery person had done.

“Sure, it’s inconvenient for us to call someone to get us out but if it were an emergency, we would have been screwed,” he said in a later tweet. “We’re 5 floors up.”

His tweet of the incident ended up going viral—garnering over 50,000 retweets and over 154,000 likes as of writing. It also spread rapidly across Instagram and other social media.

On the Twitter post, UPS customer support account even responded, if a little late, to Lawrence: “I’m sorry…I’ll be glad to assist you. Please click the link below to DM us the details of your concern.”

But the reply prompted more messages from Twitter users who criticized the shipping company for its handling of the incident.

“Feels like [the] concern was already clearly detailed,” tweeted one person.

Other Twitter commenters also bashed Lawrence for not turning the door handle up, instead of down.

He promptly replied to those saying that he “wouldn’t bother posting this if I was able to get out by pulling the handle up.”

In a later Tweet, Lawrence seemed much more lighthearted over the ordeal.

“Nothing slays on social media like a box in front of a door,” he tweeted.