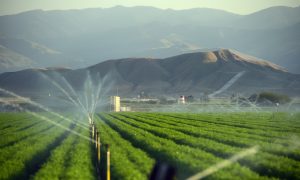 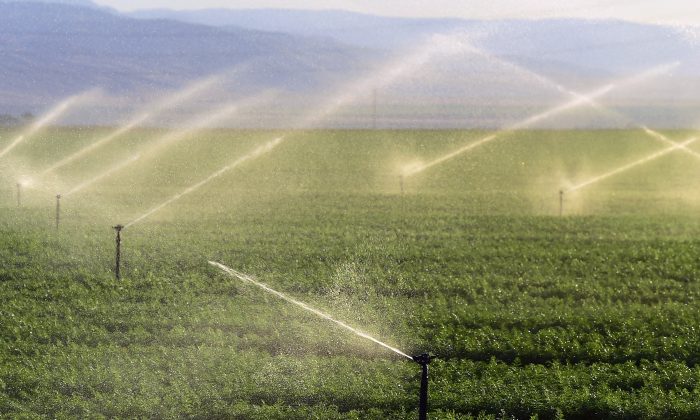 As California’s drought pushes through its fourth year, the solutions being pitched for the state’s water shortage problem have become progressively more radical. In San Diego, self-styled water vigilantes scour the city for those who violate the city’s water restriction rules, and actor William Shatner started a Kickstarter campaign on Tuesday for a $30 billion water pipeline from Seattle.

Despite the frenzy of activity to cut down on water consumption—whether it’s proposals of price hikes and desalinization, or demonizing almonds—the simple fix to California’s water problem remains in plain sight, and out of reach.

Earlier this month governor Jerry Brown ordered a 25 percent cut of urban water use and the replacement of 50 million square feet of lawns with drought-friendly landscaping, but such restrictions can only do so much because in the end, sprinklers only use up a trivial amount of water.

Although farming makes up 80 percent of the California’s human water consumption, it only contributes to 2 to 4 percent of its economy. A continual drought could easily be dealt with by a reform of the state’s water management system that shifts supplies away from farming.

“The inertia is a defining trait of water resources management,” said Patrick Reed, a professor at Cornell’s Department of Civil and Environmental Engineering.

California’s water rights still operate on an archaic first-come, first-serve basis. If a farmer was the first person to draw water from an aquifer or a river, they would have that right forever, and be able to pass down that right to their descendants.

A relic of the pioneer days of the 19th century, the system now creates incentives for farmers that own the water rights. Although they can use the water at will, they’re not allowed to sell the water at a market price, which can be a recipe for overuse and waste.

But for most of California’s history, water has been so plentiful and cheap, and the agriculture lobby so entrenched and influential, that major water management reform was scarcely a possibility, with the status quo being preserved during the 6-year drought from 1985 to 1991.

Inertia isn’t only a political problem, but a legal one as well. A progressive water pricing regime in Orange County was struck down by a state court for being unconstitutional, as it violated a Proposition that outlawed charging more for water than what it costs to deliver.

The legislative response to the drought has been lethargic, with the governor signing into law the first regulation of groundwater use last year after alarms were raised about the possible destruction of aquifers from overuse.

“There is a legitimate concern that we’re taking more than is being recharged back in, which in the long term will be unsustainable,” Reed said.

Given the disproportion between agriculture’s contribution to the California economy and its water intake, Reed said that if the drought worsens, eventually the state will be forced to scale down the farming industry because further restrictions on urban water use would be far more deleterious for the state economy.

Of course, agriculture isn’t the only sacrifice that can be offered to placate the drought. Regulations divert 50 percent of the state’s water supply for environmental purposes.

The drought has triggered a campaign to undermine certain elements of these regulations, with the upkeep of the delta smelt, an uncharismatic 3-inch fish that resembles sardines, being painted as a gratuitous waste of the state’s water supply. In 2013, 800,000 acre-feet of water was used to protect a few hundred delta smelt.

However, the environmental water supply is at present more secure than the agricultural one. The delta smelt is a protected species under the Endangered Species Act, and recent attempts to overturn the Act’s application to the delta smelt by farmers have failed in federal court.