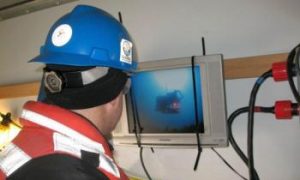 Authorities said the 3-mile sheen was harmless to people and beaches remained open — in contrast to the mass closure that occurred in May when a broken pipeline spilled 100,000 gallons of crude oil, fouling sands, seabirds and fishing areas in the same general area.

Coast Guard Petty Officer Andrea Anderson said tar ball samples were sent to labs after the slick was reported by kayakers Wednesday off the city of Goleta.

Officials will try to determine whether the tar is from natural seafloor seepage or crude extraction operations. There’s no word when results may come back.

“It’s going to be a waiting game,” she said. “We hope to rule some things out, as far as the source goes. Is it natural, is it not natural?”

The new slick is drifting east toward waters off the city of Santa Barbara.

Firefighters who went to the Goleta pier Wednesday to check on reports of a smell of gas found two kayakers who had just come ashore with their legs and boats covered in oil. One of them, Bob Seiler, told KABC-TV he and a friend were fishing when they suddenly found themselves enveloped by the oil.

“We were heading to the end of the kelp bed that’s out there and the further we got out there the thicker this film was,” he said.

The oil-rich Santa Barbara Channel, where it materialized, is the site of frequent natural seepage that results in tar balls washing ashore and slicks floating through the water. Rarely are the latter this big, however.

Although the slick was large, it wasn’t thick and gooey enough to be scooped up, said Coast Guard Petty Officer Sondra-Kay Kneen. It should simply dissipate on its own in the days ahead, she said.

As the Coast Guard sought to find the source, beaches in picturesque Santa Barbara and Goleta remained open and were expected to be packed as a heat wave gripped California.

The Santa Barbara County Department of Public Health said the slick provided no threat to public health and safety, although officials advised people to avoid contact with the oil.

The sheen was floating not far from the Santa Barbara Channel’s Platform Holly oil facility, but officials with Venoco Inc., which operates the platform, said it could not have come from there.

The platform is shut down and there is no oil in its pipeline, said Zach Shulman, the company’s director for corporate finance and investor relations.

The sheen was located about 12 miles away from the site where an onshore pipeline operated by Texas-based Plains All American ruptured at Refugio State Beach in May. The break flooded the area with 100,000 gallons of crude, of which 21,000 gallons ended up in the ocean.a