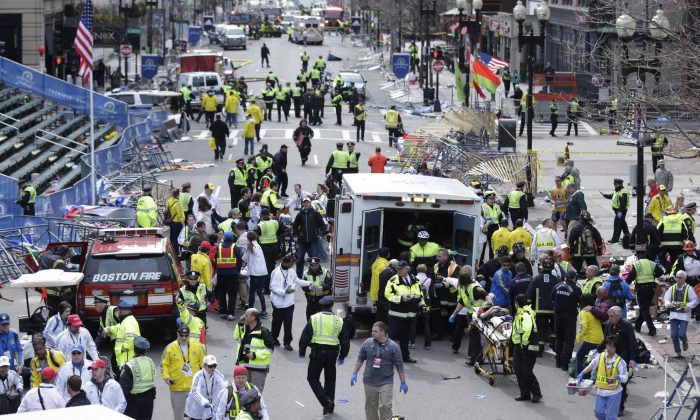 Medical workers aid injured people following an explosion at the finish line of the Boston Marathon on April 15, 2013. Identifying and refuting falsehoods early with clear and strong information is the best way to ensure truth wins out when terrorism or war strikes, a Canadian study finds. (AP Photo/Charles Krupa, File)
Canada

OTTAWA—A wildly inaccurate rumour flashed through social media in the panicked aftermath of the Boston Marathon bombings because police did not provide information on the suspects for days, a new study concludes.

Identifying and refuting falsehoods early with clear and strong information is the best way to ensure truth wins out when terrorism or war strikes, says the research report, prepared for the Canadian government.

If that doesn’t work? Fight a rumour with a sensational counter-rumour.

The study on the generation and debunking of untruths, commissioned by Defence Research and Development Canada, was recently completed by Humansystems Inc. of Guelph, Ont. The findings could influence the Canadian military’s thinking on information-related tactics.

When a gunman killed a soldier at the National War Memorial on Oct. 22, 2014, false reports began circulating in cyberspace about armed accomplices and more shots ringing out.

A year earlier, at least four major rumours quickly turned up on social media such as Twitter when two brothers detonated pressure cooker bombs near the finish line of the Boston Marathon, killing three and injuring more than 250.

“Rumours may have propagated to the extent they did because they were believable and helped to make sense of the situation,” the study says.

In the information vacuum, rumours were generated to make sense of the situation.
— Defence Research and Development Canada study

As a result, the authors say, a rumour that a woman running in the marathon was killed before her boyfriend could propose at the finish line was believable because such proposals are relatively common and it served to make sense of the question, “Who were the victims?”

Similarly, a false suggestion that an eight-year-old boy running the marathon was killed helped “put a face to the victims.”

Another rumour incorrectly blamed the bombing on U.S. Navy Seals—although some were present that day and were seen in photographs.

“Believability of a rumour increases when accompanied by attached photos,” the study says, suggesting it lends “hard” evidence of a rumour’s validity.

A fourth rumour misidentified one man as a suspect, but was considered credible because he had been reported missing a month prior to the bombings and was also supposedly struggling with depression, the study notes. There is a weak link between mental instability and violence, but it lingers as a stereotype.

Even though other suspects were formally named, the rumour about the man in question continued to swirl online because the U.S. FBI did not provide details on these suspects until three days after the attack. This is likely because it took time to confirm facts.

“In the information vacuum, rumours were generated to make sense of the situation,” the study says.

If that’s not possible or it proves ineffective, a counter-rumour can succeed. But they note it needs to be just as titillating as the rumour it is trying to eclipse.