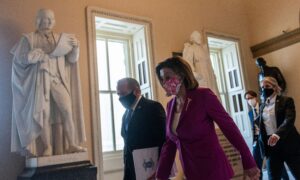 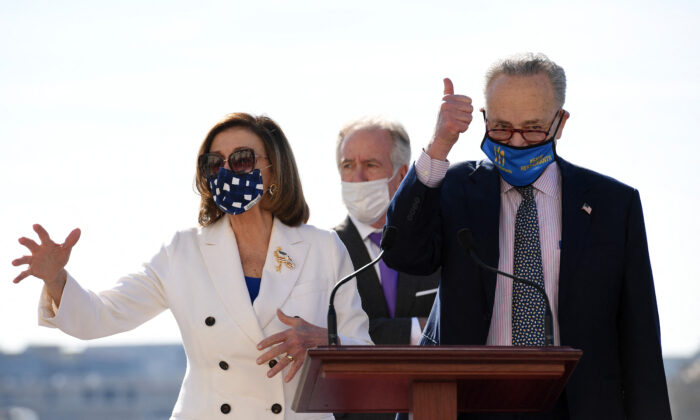 Speaker of the House Nancy Pelosi and Senate Majority Leader Chuck Schumer speak during the Bill Enrollment for the American Rescue Plan Act ceremony after the House Chamber voted on the final revised legislation of the $1.9 trillion Covid-19 relief plan, at the US Capitol in Washington, on March 10, 2021. (OLIVIER DOULIERY/AFP via Getty Images)
Economy

Businesses Hurt by Labor Shortage Due to Rich Federal Benefits

WASHINGTON—U.S. small businesses have faced an unprecedented economic disruption due to the pandemic and the subsequent government shutdowns. With the economy reopening, many business owners are now hit by another crisis, as they have trouble filling jobs.

Many entrepreneurs can’t compete with the unemployment benefits offered by the federal government. Mark Owens, owner of USA Insulation and a trucking company in Indiana, is one of them.

The inability to hire people “has put a burden on our business,” Owens said during a virtual roundtable hosted by Rep. Jackie Walorski (R-Ind.) on March 24. “Because nobody wants to come and work.”

His business ran 150 job advertisements from December 2020 through Feb. 15 but only three people showed up for an interview during that time. And their objective, he said, was to provide proof of a job search needed to receive benefits rather than to actually get the job.

Candidates say they want the job but they never show up, Owens said, “because we couldn’t compete with the unemployment [benefits.]”

According to him, the inability to hire people has been an “emotional rollercoaster” for many small-business owners.

Recent business surveys show that the majority of small-business owners who are hiring have difficulties finding qualified workers. According to a monthly survey by the National Federation of Independent Business (NFIB), job openings in February reached an all-time record high, with 40 percent of companies saying that they can’t fill job openings.

“This is a huge departure from what we saw in the last recession in 2009, where it was roughly 7 percent,” Holly Wade, executive director at the NFIB Research Center, said at the roundtable meeting.

The CARES Act enacted in March 2020 provided a $600 weekly benefit on top of regular unemployment insurance benefits. Following the expiration of the supplemental benefit in July 2020, the Trump administration via executive order authorized an extra $300 per week federal payment.

The Biden administration’s new $1.9 trillion stimulus plan extended the weekly unemployment benefit at $300 through Sept. 6. In addition, the bill included a provision that made the first $10,200 in unemployment benefits received in 2020 nontaxable for households earning $150,000 or less.

Some economists have argued that the supplemental benefit has discouraged workers from returning to work. According to American Action Forum, a center-right policy institute, 37 percent of workers could make more on unemployment at the $300 level than they would earn by returning to work.

Advocates of the supplemental benefit, however, argue that continued relief is critical, especially for Americans experiencing long-term job losses in the hardest-hit service industries, such as restaurants.

‘Work Ethic Has Been Destroyed’

Walorski and her several Republican colleagues said at the virtual roundtable that mainstream businesses shouldn’t have to compete with the federal unemployment benefits for workers.

“I can’t even imagine how we’re ever going to tally the cost of how much of America’s work ethic has been destroyed during the COVID; and that the additional amount of federal money that’s flowing out there is just adding to this destruction,” Walorski said.

Chris Roth, president of Reinke Manufacturing in Deshler, Nebraska, has seen a surge in his business over the past few months but had a difficult time getting the positions filled.

“We ended up bringing employees in from out of state,” Roth said at the roundtable. “We actually bussed them here. We put them up in the local motels and paid for the motels.”

Roth’s company later bought a motel and is now in the process of renovating it to turn it into employee housing for out-of-state workers.

A group of Republican lawmakers led by Rep. Kevin Brady (R-Texas) announced that they would introduce legislation to help local businesses that face difficulties in hiring. The bill would encourage work by allowing states to turn enhanced unemployment benefits into a one-time hiring bonus. The proposal also provides support for reemployment services for jobless workers.

Speaking at the roundtable, Alex Adams, budget director for the state of Idaho, said that his state implemented “return to work incentives” to offset the negative impact of the $600-per-week supplement last year.

To incentivize work and help local businesses, the state paid a $1,500 bonus to each person who went back to work. The state distributed 27,192 bonuses totaling $36 million, which was paid for out of the state’s discretionary portion of the CARES Act resources, Adams said.

Phillip Hayes, vice president of The Arnold Group, a Kansas-based human resources company, said that recruiting for his clients is “more difficult today than it was pre-pandemic.”

“Our company and hundreds of businesses that we serve have encountered more recruiting hurdles and struggles than ever before, largely due to the consequential additional federal unemployment weekly boost dollars that were put in place,” he said at the virtual roundtable.

There are currently more than 50,000 job openings in Kansas, Hayes said, on just a single recruiting platform.

“It’s absolutely discouraging that unemployment insurance claimants are incentivized so richly that businesses are forced to consolidate shifts or close production lines altogether,” he said.