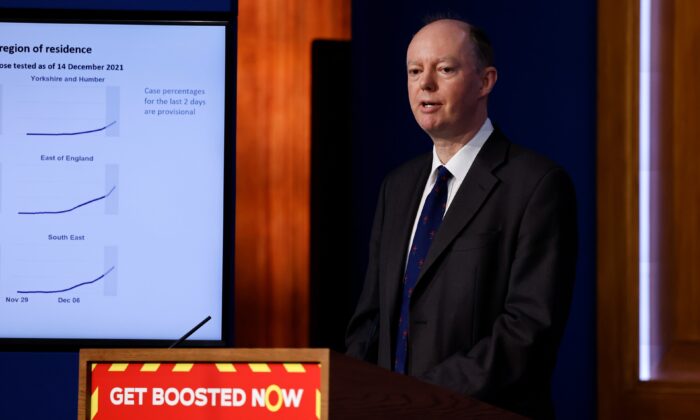 British businesses have called for government support after a government scientific advisor called on people to reduce socialising during the Christmas season.

The hospitality sector was rattled after Professor Chris Whitty, England’s chief medical officer, said at a Downing Street press briefing on Wednesday that people should consider cutting back socialising around Christmas due to the threat from the Omicron COVID-19 variant.

But Scotland’s First Minister Nicola Sturgeon has already given specific guidance to urge people to limit their socialising to three households around Christmas.

Businesses have reacted by calling on the government to provide fresh support packages, without which they fear their existence will be threatened.

“Despite this still we heard no news of any new financial support measures coming from government to help those businesses, and others badly affected by the current restrictions,” she said.

Theatre director Sir Nicholas Hytner said venues were in “crisis mode” with shows closing as actors and other staff testing positive for the CCP (Chinese Communist Party) virus while bookings have “fallen off a cliff.”

Conservative MP Anne Marie Morris agreed. “If we’re effectively telling people not to visit hospitality venues this Christmas, then this needs to be accompanied by immediate sector specific financial support from the Treasury,” she said.

The Treasury insisted some support packages remain in place and said it will “continue to respond proportionately to the changing path of the virus,” but set out no new measures.

Talking to broadcasters on Thursday, Boris Johnson insisted his government has “kept business going” through the pandemic.

“We’ve kept businesses going throughout the crisis with more than £400 billion ($531 billion) worth of support. We’ll continue to support business with the COVID recovery loans, with business rate reductions, with VAT reductions, and the best thing we can do is make sure that we get back to normality as fast as possible by getting boosted now,” he said.