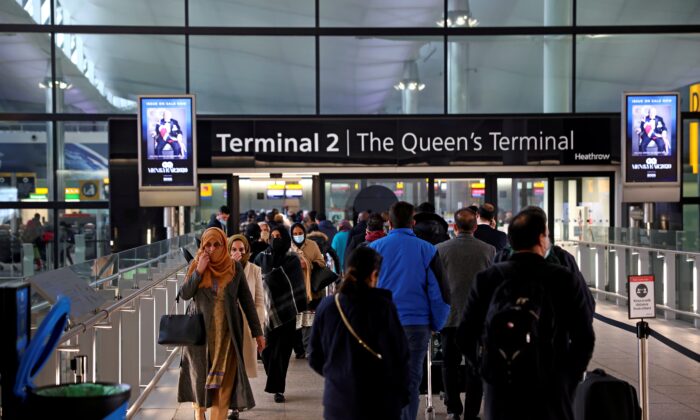 London’s Heathrow Airport said that renewed travel restrictions made on the discovery of the Omicron CCP (Chinese Communist Party) virus variant has spooked passengers, especially business travelers, who worry they won’t be able to get back home.

According to figures released Friday, the demand for air travel, which had started to inch back to normalcy in October, had lost its momentum, and numbers in November were 60 percent below what they were before the pandemic, despite the fact that the United States had restarted international air travel for vaccinated passengers last month.

The airport said in the report that business travelers were “concerned about being trapped overseas,” because of the strict regulations imposed by the UK government. Britain was one of the first countries to impose a travel ban on flights coming in from southern African countries, where the latest variant was discovered.

This has resulted in a high number of cancellations and decline in travel numbers. The airport requested ministers to lessen restrictions as soon as it’s safe, and “allow UK nationals from red list countries to isolate at home.”

“By allowing Brits to isolate at home, Ministers can make sure they are reunited with their loved ones this Christmas,” said Heathrow CEO John Holland-Kaye. “It would send a strong signal that restrictions on travel will be removed as soon as safely possible to give passengers the confidence to book for 2022, opening up thousands of new jobs for local people at Heathrow. Let’s reunite families for Christmas.”

Although the airport estimates only around 60 percent of 2019 traffic for next year, Heathrow expects to start recruiting and training employees ahead of next summer.

“We do not expect that international travel will recover to 2019 levels until at least all travel restrictions (including testing) are removed from all the markets that we serve, at both ends of the route, and there is no risk of new restrictions, such as quarantine, being imposed,” the report states. “This is likely to be several years away.”

From the end of last year to November, 2021, there has been a decrease of more than 30 percent of terminal passengers in the EU market. For North America, it was down by almost 50 percent, and for the Asia/Pacific region, it was down by 58 percent.

UK ministers said that passengers coming into the region must take a PCR test before boarding their flights and after disembarking. For the 11 African countries on the red list, travelers are required to stay in quarantine before interacting with society.