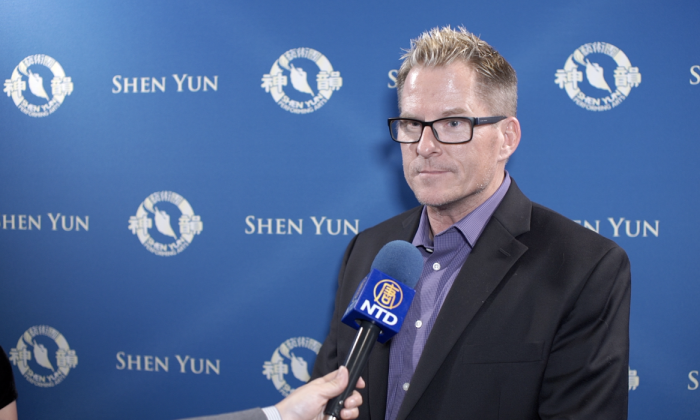 “We’ve wanted to see this for many years,” said Joe Houston.

Houston said that that he was impressed by the precision of the dance, and the stewardship of history, but was also struck by the irony that Shen Yun cannot be seen in China.

Shen Yun is based in New York. Each year their touring companies train rigorously for six months and then tour. This year there are six touring groups and over 130 cities that will have an opportunity to see Shen Yun.

But none of those cities are in China. Shen Yun cannot go to China for risk of political persecution by the ruling communist party there, which is responsible for stifling the Chinese traditional culture through violent campaigns like the Cultural Revolution.

Shen Yun brings that politically suppressed heritage and priceless cultural legacy back to life through their world wide performances, in effect rescuing the culture.

“For me that’s what I was experiencing the most,” he said. “Their passion for the history, and also just the fact that to be able to express that here, but not even what I presume is their home country. But to be able to share it with people around the world so that we know.”

“If you have ever thought of coming I would highly recommend it. It’s just a great experience,” said Houston.

Houston’s wife, Tricia, said that her husband’s 50th birthday was the perfect opportunity to take her family to see Shen Yun and let her children experience Chinese culture.

“That’s what we are so excited about because it is unbelievably amazing,” she said.

The Houston children are 7 and 9, and they enjoyed Shen Yun.

“They loved it,” said Tricia Houston. “They were mesmerized the entire time. The dance is so beautiful, and the colors, the vibrancy of the colors. They couldn’t keep their eyes off of the stage.”

“The passion that you can feel that comes off the stage through the dancers was just heartfelt. You can feel the emotion from them in each story that you experience,” she said.

She agreed with her husband that it is unfortunate that Shen Yun cannot go to China.

“We are only in intermission and it’s so amazing. We are just so blessed.”

“It’s so elegant and so beautiful onstage. The way that it’s presented here, it’s completely different from anything I’ve ever experienced before,” she said.

“I hope for the Chinese’s sake, and for our sake as well, being able to experience this, that it’s passed down generation through generation,” said Mrs. Houston.

“And I believe that’s why it was so important for us to bring our children to experience it, and we have just been thrilled,” she said.

“[Shen Yun is] an unbelievable experience that should not be missed.”

With reporting by NTD and Carrie Gilkison.