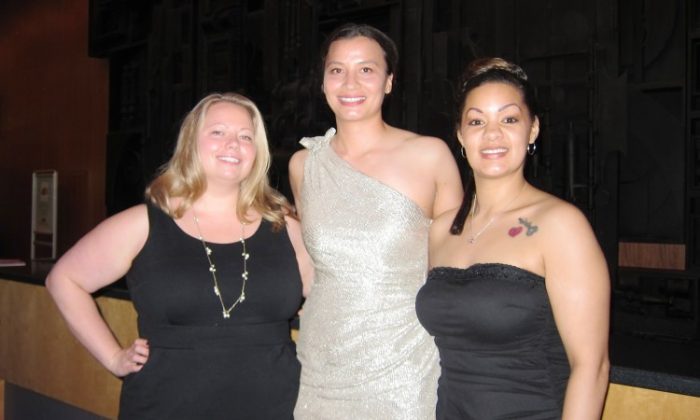 LOUISVILLE, Ky.—”Even in the very beginning where they were going through the galaxy and you saw the planets and everything, you really do feel like you’re just flying through the universe,” said Dana Yates, after seeing Shen Yun Performing Arts at the Kentucky Center for the Performing Arts.

“I felt transported to a place where the laws of physics don’t apply, and I’m able to fly through the stars and everything. It’s amazing,” continued Ms. Yates, a realtor who owns Treasured Pets.

Ms. Yates was speaking about the traditional Chinese music and dance performance she’d seen on April 30 with her friend, Stephanie Crable, a loan officer for First Liberty Financial.

Classical Chinese dance combines the subtlety of inner expression, as well as the excitement offered through techniques of aerial tumbling, leaps, and spins.

Ms. Crable commented on the dances: “They were breathtaking, a lot of subtle but powerful movements. It had a lot of, I felt, talent. [Technical] feats, you know, jumping and spinning and body control.”

“There were moments where you, you know—it was a powerful moment—you wanted to clap, but you held it. It wasn’t finished. It was like we didn’t know if we should clap,” she said.

Ms. Crable felt joy in the performance, saying, “Because of the atmosphere, the joy in the dancers, and the theme of the whole thing. It’s powerful in the way that they present it. It’s very like meditating, I guess, that you see something, and it’s all through dance. There’s no words; it’s through their motions in the way they convey it, makes you feel and forget about whatever your worries are, forget about where you’re at and you’re just in that moment and they bring you to that moment.”

“Oh, just joy and peace,” were Ms. Yates’s words. “I actually cried several times, but it was just definitely beautiful.”

The costumes and music appealed to Ms. Yates. “Oh, I loved—the costumes were beautiful,” she said. In mentioning one specific dance, Phoenix Fairies, she said, “The costumes when they were spinning, I mean, you really just felt transported.”

According to the program notes, “Secluded in a faraway paradise, phoenix maidens soar with celestial grace. With every movement, their shimmering skirts echo the endless depths of a star-speckled sky. Startling in beauty and striking in elegance, they dance to form a heavenly train.”

Of the music, Ms. Yates noted the erhu, a two-string Chinese instrument. “The music, I can’t believe that the instrument that had only two strings. So many sounds came out of it,” she said.

She also enjoyed the digitally animated projection on the backdrop that seemed to bring characters from the sky to the stage and off again. “It was amazing when they went over the wall and then … went onto the screen and flew away.” Each time she felt astounded, “perfect timing on that,” she said.