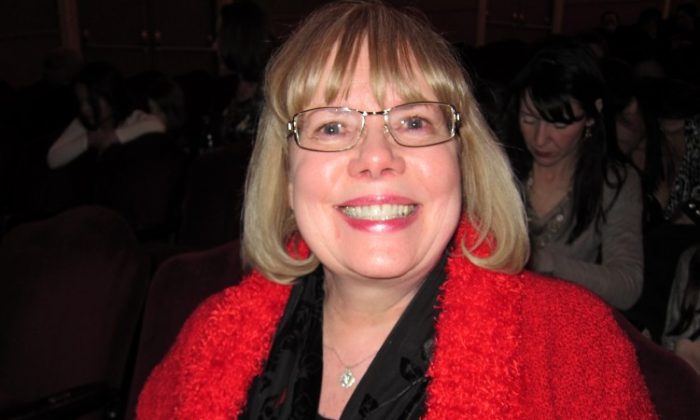 She said as soon as she saw Shen Yun advertised she knew she had to see it. “When we saw this we thought this would be very unusual and different and beautiful, and it is.”

Ms. Finke said she appreciated this, and, “I like it all, and truthfully I’ve never seen anything like this before. So it’s very refreshing and very unique.” According to the program, “prepare to enter a magical world where the good and the righteous always prevail, and where beauty and purity have never been lost.”

To her, the visual aspect of the show and the choreography were very appealing, “I like the beauty of the colors and the artistic ability of the dancers—you know the graceful moves.” Classical Chinese dance contains China’s rich cultural traditions, which allow its movements to be deeply expressive, such that the personalities and feelings of the characters can be portrayed with unparalleled clarity,” according to the program book.

Ms. Finke said, “I like it all. It is extremely expressive.”

She said she would recommend the show to others, “absolutely! It’s a beautiful experience … I mean the music—the music is so beautiful too. I would just say all the elements are wonderful. I think it’s very beautiful.”

Shen Yun Performing Arts Touring Company has two more performances in Minneapolis and then will be at Clowes Memorial Hall of Butler University, in Indianapolis for two performances, March 13 and 14.