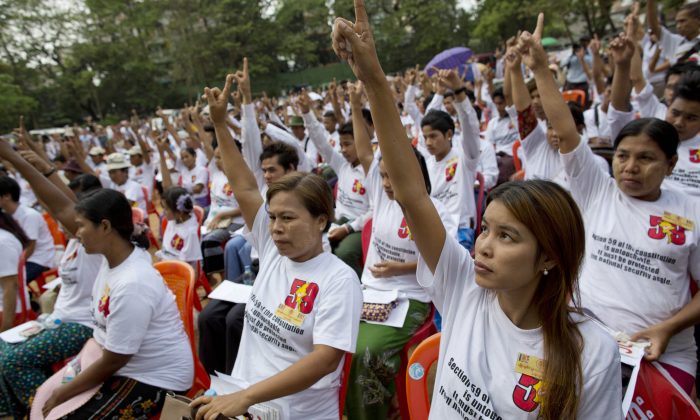 Supporters of Burma nationalist groups raise their hands in support of preserving a constitutional clause barring Aung San Suu Kyi, the popular leader of the country's new ruling party, from becoming head of state, in Yangon, Burma, on Feb. 28, 2016. Sunday's rally drew at least 350 people. The clause disqualifies anyone with a foreign spouse or children from assuming the presidency. Suu Kyi's late husband was British, as are her two sons, leaving her ineligible despite her mandate as the head of the National League for Democracy (NLD), which secured a landslide victory in a general election last November. (AP Photo/Gemunu Amarasinghe)
Asia & Pacific

Suu Kyi’s National League for Democracy party is set to take over government in March after winning November’s election in a landslide. But Suu Kyi cannot become president because an article in the military-dictated constitution bars anyone whose immediate family members are foreign nationals from holding the office. Her two sons are British, as was her late husband.

The National League for Democracy, or NLD, floated the idea of trying to have the article suspended, but seems to have abandoned it due to apparent opposition from the military.

Suu Kyi is likely to go ahead with her previously announced plan of having a proxy for her serve as president, while she makes all the executive decisions.

Sunday’s rally in Yangon was believed to have been organized by the Buddhist nationalist group Ma Ba Tha, which is led by monks. The group is notorious for stirring up the anti-Muslim sentiment that has led to bloody sectarian violence.

Ma Ba Tha also had favored the incumbent military-backed government party over Suu Kyi’s NLD during last year’s election campaign, but had minimal influence on the vote. It is seeking to reivigorate its political power after the setback.

Sunday’s rally drew at least 350 people, many donning T-shirts reading “Section 59(f) of the constitution is untouchable. It must be protected from a national security angle.”

The demonstrators defended retaining the article for nationalistic purposes, claiming their position was unrelated to Suu Kyi’s possible bid for the presidency.

“We support this event … because we don’t want outsiders, foreigners, overwhelming our country,” said organizer Thant Myo Oo. “Not only Suu Kyi, whoever is connected with the outsiders, we cannot accept.”

Burma began a shift to civilian rule in 2011, when a quasi-civilian government took power under President Thein Sein, a retired general. The country’s fragile transition has been marred by ongoing civil conflict and several bouts of deadly riots between the Buddhist majority and minority Muslims.

Event organizers denied Sunday that they were members of Ma Ba Tha.

“Ma Ba Tha is a religious organization; it’s not a nationalist organization,” said Win Ko Ko Latt, an organizer and speaker at the rally, who said his intention was to protect Burma’s 135 officially recognized ethnicities. “Anything representing nationalism, we will support fully.”