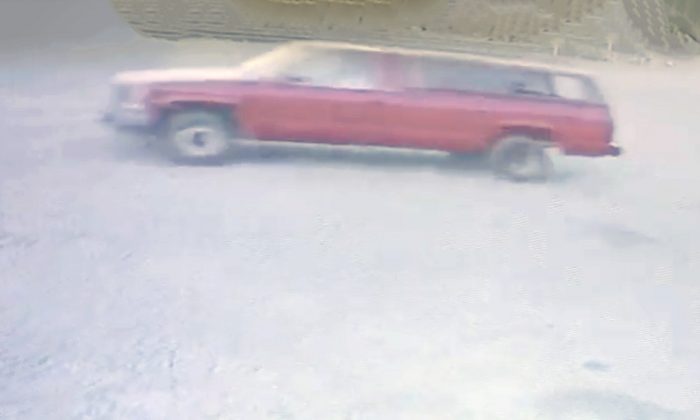 This red 1992 Chevy pickup truck was stolen in Kennewick, Wash., on Aug. 25, 2019. (Courtesy of Kennewick Police Department)
Crime and Incidents

Authorities questioned a West Coast man after he reported his vehicle stolen. As police investigated the incident on Aug. 25, they saw video surveillance footage that showed he was up to no good, in fact, he was in the process of robbing a nearby business at the time.
William Kelley reported a cyclist drove off in his red 1992 Chevy pickup at the 500 block of East Bruneau Avenue in Kennewick, 214 miles southeast of Seattle.

“The owner of the vehicle … was reporting that someone just stole his red 1992 Chevy pickup with maroon canopy, WA license B96531X,” police said on Facebook.


Surveillance footage shows a male cyclist passing the parking lot and circling back to the red pickup truck.

Kelley told officers he left his keys on the truck seat.

“A male riding a 10-speed rode by and discovered the keys and then threw his back bike in the bed of the truck and fled,” police said.

Kelley appears to notice something is wrong and quickly returns to the pickup truck, which starts reversing out of the parking bay.
The driver notices Kelley has returned so quickly swerves out of the way and speeds off, leaving the owner only enough time to strike the car with a bag he is carrying.


When police reviewed the footage, they discovered Kelley was not entirely innocent. He appeared to be robbing a business while the auto theft happened.
“A new fact was discovered,” police said. “Kelley was at the location because he was stealing items from a business across the street.”

As the officers continued to investigate, they discovered that Kelley’s car was stolen while he was busy robbing a business across the street https://t.co/sAbB8bwuWv

After being arrested as a suspect in a burglary, Kelley was remanded to Benton County Jail on a warrant.

“A new charge of burglary was added,” police said.

Officers have found no sign of Kelley’s pickup truck at the time of this publication.

The pickup owner was then booked in the Benton County jail on a warrant and a new burglary charge. His pickup is still missing.https://t.co/hEm4V8jeAu

Anyone with information on the pickup truck or alleged car thief is encouraged to contact Kennewick Police Department by phoning 509-585-4208 or visiting www.go2kennewick.com/386/Police and quoting reference case number 19-33651.