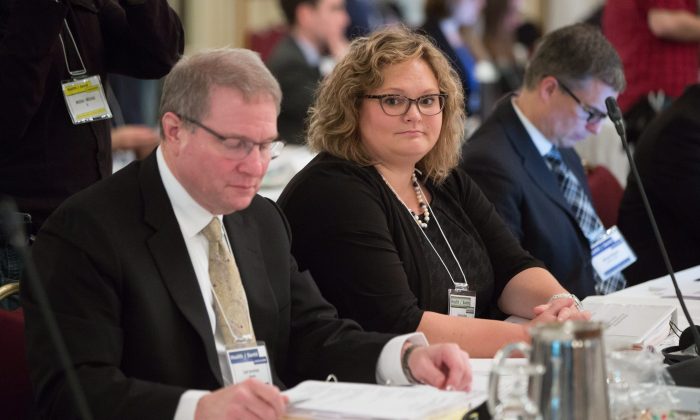 Alberta Health Minister Sarah Hoffman and deputy minister Carl Amrhein (L) attend a meeting of provincial and territorial health ministers in Vancouver on Jan. 20, 2016. The federal government has joined the provinces and territories in a program to buy drugs in bulk. (THE CANADIAN PRESS/Darryl Dyck)
Canada

VICTORIA—The federal government joined the provinces and territories on Jan. 19 in a program to buy drugs in bulk, a sign of a thaw in relations over the national health agenda.

Health Minister Jane Philpott said drug plans administered by the federal government will unite with the provincial and territorial pan-Canadian Pharmaceutical Alliance to negotiate lower prices on brand-name and generic drugs. Ottawa didn’t join the alliance when it was formed five years ago.

Prof. Michael Prince, a University of Victoria health policy expert, said the federal government’s decision to get involved in the plan adds strength to the program.

Bringing the government of Canada to the table is going to be very helpful.
— Prof. Michael Prince, University of Victoria

Ottawa’s change in position on the drug program was announced ahead of a meeting of the country’s health ministers this week in Vancouver that covered everything from the treatment of chronic diseases to funding formulas.

The new tone between Ottawa and the provinces comes after a decade of testy relations when Stephen Harper was prime minister.

“For the last 10 years—and I don’t need to get partisan about this—we had a prime minister who chose not to engage very actively on these inter-governmental files,” said Prince.

“[Harper] was more interested in law and order and criminal justice. That’s where his priorities were.”

Prince said by resuming meetings on health care, the federal government “will reactivate and re-energize federal-provincial relations on health issues in a way we haven’t seen for over a decade in this country.”

In a statement after the drug program announcement, Philpott said combining the negotiating power of the federal, provincial, and territorial governments achieves greater savings for all publicly funded drug programs, increases access to drug-treatment options, and improves the consistency of pricing across Canada.

The pan-Canadian Pharmaceutical Alliance has completed more than 89 negotiations on brand-name drugs and price reductions on 14 generic drugs, producing a savings of more than $490 million annually.

“That’s what we want,” he said. “The more the merrier. They have a number of drug plans they can bring on board and increase our bargaining power significantly.”

Lake said the provinces want to see where the federal government is going on an assisted-dying law, marijuana policy, and funding formulas, but those issues will require more time to work through.

“As you can imagine with a new federal government, and I think we have eight new health ministers, this is not the meeting that will decide definitely a new accord or new policies,” he said.