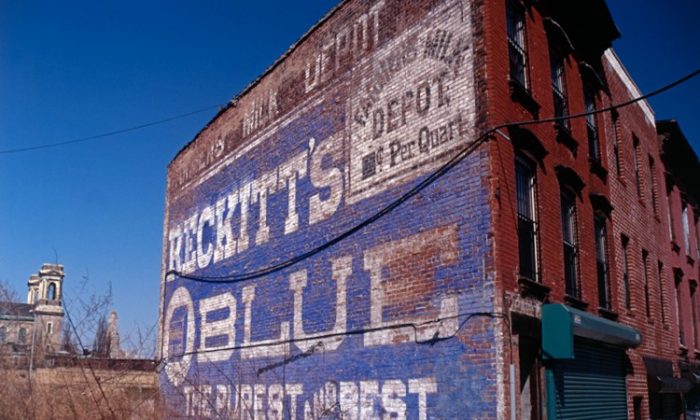 A watercolor painting of Whitecross Ropes in Hull, U.K. (Sandra Walker)
US

Evans shot some of the fading murals of his day, and a new generation of artists now captures the fading works, often delving into the stories behind them.

Brooklyn photographer Frank Jump began documenting what he calls the city’s “fading ads” after he learned in 1986 that he was HIV positive.

“I was documenting something that never expected to live so long, and I didn’t expect to live so long,” said Jump, who has compiled his work into a book titled “Fading Ads of New York City.”

The lead-based paint, regulated into obsolescence these days, clings to the buildings sides the way no paint today could. In some cases, the paintings have outlived the products they advertise, and the ads chronicle the history of the city from a different perspective.

On a trolley across the Brooklyn Bridge, Thomas Edison panned his camera along an early 20th century cityscape. The reel shows horse-drawn carriages, factories lining the shore, a painted ad for Fletcher’s Castoria medicine.

“Even at the turn of the century, the painted ad was to some people an eyesore,” said Jump. The City Beautiful movement sought to ban painted ads, but the ads’ popularity won out. Many New Yorkers felt an excited anticipation for the unveiling of the latest ad, explained Jump.

The plethora of old milk ads in Brooklyn recall a time when the borough’s dairy industry was booming. Sweet’n Low was first put into packets and sold at a diner near the Brooklyn Naval Yard; the faded words “The Perfect sugar substitute” advertised the saccharine invention on the side of a building in the region for many years after.

As for a fading J.J. Friel ad, all Jump knew was that Friel had a loan business with offices on Broadway and Myrtle Avenue. Before submitting the manuscript for his book on faded ads, Jump heard from a descendant of Friel’s.

Friel was an Irish immigrant who became a ditch digger in New York. While digging a ditch along Willoughby Avenue in Bushwick, Brooklyn, a stately home caught his fancy and he vowed it would be his.

He started working at a pawnshop, helped his boss build up the company, and eventually became a partner and owner. Eventually, he bought his dream home.

The painters also had colorful stories.

“What drew me to fading ads,” said Walker in an email, “[is that] these ads evoke to me memories of an important era in American life. Primarily, of the Great Depression. Men (usually) who could find no other work became itinerant sign painters—called ‘wall dogs,’ and traveled the country emblazoning sides of barns with hand painted signs.”

She said faded ads in Britain are similar in content and style to American ads, but Jump noticed a marked difference in other European cities.

In Italy, he saw quotes from Benito Mussolini and other signs of a fascist past. In France, most ads he saw were for liquor and perfume.

Jonathan Airis of Brooklyn-based Colossal Media Group is in the ad painting business, which he said still has a place in outdoor advertising.

“The difference we see today, beyond our paints’ chemical makeup,” said Airis, “is that the ads themselves have gotten more complex, because the technology of advertising and design has evolved. We are tasked with recreating more elaborate ads and campaigns.”

“We view painted ads today as a re-emergence of a lost art,” said Airis. “We are doing our part in hopefully maintaining its interest as well as continuing to teach a new generation the skilled trade of painting them.”