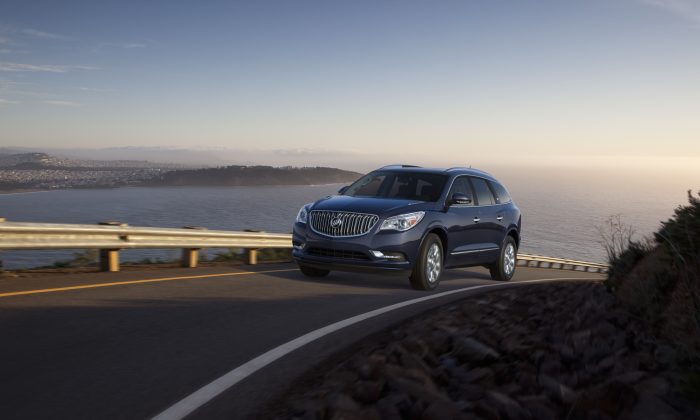 During the mid-size Cadillac XT5 crossover’s unveiling at the recent Los Angeles Auto Show, executives mentioned it is only one of several new high-riding wagons under development for GM’s luxury brand. Cadillac has been caught flat-tired with only one crossover and the Escalade to counter the German juggernauts. It’s especially unfortunate given the luxurious three-row crossover already in GM showrooms. You know it as the Buick Enclave.

The thing is immense, measuring between the short and long-wheelbase Escalade. Yet, it looks smaller in its aero styling that still looks concept-car chic with black chrome water fall grille, flared fenders, long roofline, and six proper ventiports on the hood. Direction-adaptive Tucker-style HID headlamps, LED running lamps, LED taillamps, and 19-inch chrome alloy wheels keep it fresh. Load a truck’s worth of stuff through the power hatch.

Save for plasti-woodgrain paneling the dashboard and doors, Enclave’s interior cocoons passengers in top-grade luxury that looks like it came straight from the design studio. Even the gear selector looks special. Large analog gauges and the center analog clock are classy, even if Buick’s latest LCD instrument cluster and touchscreen are unavailable. Though, Buick’s IntelliLink infotainment system can access music and apps, like Pandora internet radio and Stitcher SmartRadio, by voice, touchscreen, or Bluetooth-enabled smartphones. Ice blue ambient lighting arcs across the dash and all four doors at night.

It’s one of the best-riding family vehicles.

I wouldn’t complain if Enclave had Cadillac’s twin-turbo 3.6 L V6, but the normally-aspirated version under the Enclave’s hood conjures 288 hp, 270 lb-ft of torque, and 16/22 mpg city/hwy with all-wheel-drive. Routed through a 6-speed automatic transmission, that’s enough power to tow 4,500 lbs of camper, boat, or classic car even if fuel economy is essentially identical to the truck-based, V8-powered Escalade. I never wanted for more power, but load up with seven passengers and a trailer, and you may.

Roadward, the Enclave’s chassis proves suspension systems need not be complicated. The four-wheel-independent suspension absorbs rough roads with nary a shudder, remains composed in corners, and can plop off of a bridge ramp without bouncing—all sans electronics, air, or 22-inch steamroller tires. Other luxury SUVs ride like farm trucks by comparison. Four-wheel disc brakes bring it to a halt. All in, it’s one of the best-riding family vehicles.

As a family car, safety is paramount. Beyond a full array of airbags, Enclave can be equipped with a rear vision camera, side blind zone alert, rear cross traffic alert, forward collision warning, and lane departure warning systems. Showing its age, none of those systems can actively intervene to slow or guide the big ute.

One can assume a redesign of the Enclave which debuted for 2008, is near as it does not comply with the new Buick grille and body styling that just debuted on the 2017 LaCrosse. Interior ergonomics and safety tech are not quite to current Buick standards either, but the Enclave has aged beautifully and is still one of my favorite vehicles in its class. With its tomb quiet interior, elegant styling, and smooth suspension, the big crossover that saved Buick in America stands ready for cross-continent journeys with the entire tribe aboard.

Why GM has, for nearly a decade, declared a version of the Enclave architecture Cadillac’s forbidden fruit is a mystery, but a drive in the Enclave leaves no doubt it could have made a great Cadillac. A base price of $39,065, or $54,230 as-tested, puts Enclave against the Acura MDX, Ford Explorer Platinum, Volvo XC90, and Audi Q7.