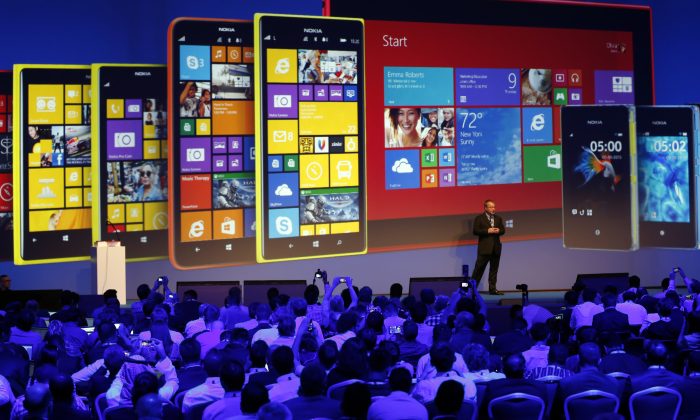 Nokia announced a breakthrough in North America Tuesday, with revenue reaching five times that of last year and unit shipments up 366 percent.

Shipments worldwide set a new record at 8.8 million, up from 7.4 million last quarter, Nokia Corp. said in its quarterly earnings. However, globally sales are still decreasing, down 22 percent from last year.

Nokia started targeting the United States last year for its Windows Phones, a market, which is crucial for smartphone makers, according to IHS analyst Daniel Gleeson.

“Even if Nokia and Windows Phone was a success in Europe, without U.S. success it would always be very late in getting the hottest apps,” Gleeson wrote.

“The majority of key app developers based in the U.S. are developed primarily for the U.S. market,” he wrote.

Low-end smartphones like the Lumia 520 are driving sales in the United States. The redesigned handset has a 23 percent market share for Windows Phones worldwide, according to research firm Adduplex.

While Nokia’s smartphone sales are up 40 percent worldwide, the average selling price for Lumia phones dropped 8 percent from last year.

“Despite spending big on marketing campaigns for its new flagship the Lumia 1020, the vast majority of its sales are coming from the lower end of its portfolio,” Gleeson wrote.

Low-end phones make up about 90 percent of Nokia’s business and Nokia is still the second largest mobile phone maker. The Nokia 105, a phone selling for just about $20, only costs Nokia $14.20 to make, according to IHS.

Yesterday, Nokia CEO Stephen Elop inaugurated its first factory in Vietnam. He expects the manufacturing plant, located in the Bac Ninh Province, to produce 45 million phones quarterly, 95 percent of which will be exported.

The Nokia 105, which is nearly identical to the iconic Nokia 1100 cellphone, now costs nearly three times less to make. But while Nokia specializes in getting the most out of lower-end phones, this could be a concern for Microsoft moving forward, according to Gleeson.

Elop has said that he sees Nokia’s phone as the first step for consumers to get “on-ramp to Windows Phone,” but Gleeson said the habits of these consumers could still mean fewer developers creating for Windows.

“Consumers buying cheap devices usually don’t spend as much on apps and content which lessens the appeal of developing for Windows Phone,” Gleeson wrote.

Regardless, Nokia’s Lumia phones provided Windows Phone a foot in the door to the smartphone market. As of last quarter, Windows Phones captured 3.9 percent of the 8.9 million smartphone shipments worldwide, according to Strategy Analytics.

According to Gartner analyst Carolina Milanesi, this was because of the success of the Lumia 1020 and Lumia 928 phones. The Windows Phone Lumia 1520 phone-tablet and the lower cost version, Lumia 1320, go on sale next month.

Microsoft Corp.’s acquisition of Nokia’s handsets and devices business is expected to close early in 2014 and it will have the right to use the Nokia brand on its phones for 10 years.

After the deal closes, Nokia’s core business will be its Nokia Solutions and Networks (NSN), its maps business HERE, and Advanced Technologies.

Overall, NSN reported a 7 percent decrease in net sales in the third quarter, which it attributed to “seasonality and NSN’s strategic focus.” Nokia bought back the other 50 percent stake in NSN from Siemens earlier this year.

“Our strategy work is making good progress and it has already become clear that there are meaningful opportunities for all of our business areas: NSN, HERE, and Advanced Technologies,” stated Risto Siilasmaa, Nokia chairman and interim CEO. “Subject to the completion of the Microsoft transaction, Nokia will have significantly improved earnings profile, a strong financial position and a solid foundation from which to invest.”

Nokia will also be licensing its HERE maps business and patents to Microsoft.