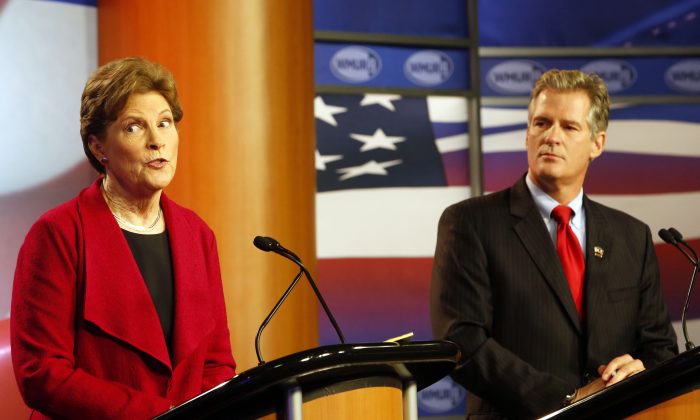 On the eve of the midterm election, incumbent Democratic Senator Jeanne Shaheen is looking to fend off Republican challenger Scott Brown, who has a slight lead against her for the first time in recent polls.

A New England College poll of 1,526 likely voters released Sunday puts Brown ahead of Shaheen—48.7 to 48 percent. Brown had trailed Shaheen in virtually every single poll throughout the campaign, but has been steadily closing the gap in recent weeks.

Brown has mostly campaigned on national issues, attacking president Obama and Shaheen for being weak on border security and the containment of ISIL, in a TV ad.

He’s also been aggressively advocating for a travel ban on flights from Ebola-stricken West African nations and a mandatory quarantine for healthcare workers who have had contact with Ebola patients.

Local issues are unlikely to be his forte, as Brown had moved to New Hampshire from Massachusetts only last year, in preparation for a new Senate bid after losing his seat to Elizabeth Warren in 2012.

Brown’s short history in the state was put on the spotlight when James Pindell, the moderator from Thursday’s televised debate, challenged Brown’s comment that Sullivan County was north of Concord, the state’s capital.

Pindell repeatedly said that Sullivan County was west of Concord, and insinuated that Brown had confused the county with North Country, where most of the state’s ski resorts were based, after Brown mentioned ski tourism in Sullivan.

Brown clarified after the debate that he was referring to the Mount Sunapee, a ski resort in Sullivan County that he had visited recently.

Geographically, Sullivan County is to the northwest of Concord. Pindell later apologized to Brown on air and on Twitter.

“I said that Sullivan County was west of Concord, not north of Concord. The truth is, it’s both,” he said.

Shaheen has shied away national issues, as an association with president Obama—who has a mere 37 percent approval rating from likely New Hampshire voters—is more a liability than an asset.

Instead, she has played up her achievements for the local community during her stint as governor and her endorsement from a slew of mayors and unions.

Republicans need to make a net gain of six seats to secure control of the Senate. The New Hampshire seat is not considered one of the top six most likely seats turned over to Republicans.