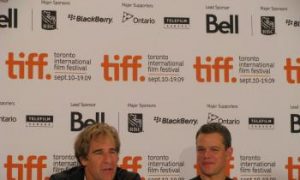 Matt Damon Thought Call for 'Informant' was a Demotion
0 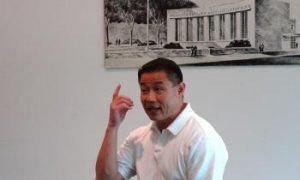 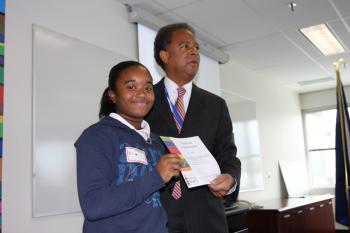 WORK OF ART: Grade seven students from IS 190 in the Bronx stand by their paintings and drawings at the New York State Division of Human Rights. The art was part of a cross-cultural exchange with Nicaraguan children. (Tara MacIsaac/The Epoch Times)
US

By Tara MacIsaac
Print
NEW YORK—Grade seven students from Bronx Intermediate School 190 gathered on the fourth floor of One Fordham Plaza, the location of the New York State Division of Human Rights (NYSDHR) offices, to learn about discrimination on Monday.

Human Rights Commissioner Galen D. Kirkland, an African American, shared with the students about his experience of discrimination as a child. He recounted being turned away from a restaurant with his family because of their skin color.

The children themselves also talked about bullying and bad behavior.

“I’m not going to lie. I did a little discriminating,” said 12-year-old Kahdeen Bennett, “but now I know not to talk about people.”

The children have been learning about overcoming biases and finding commonalities between cultures since the previous school year. They began communicating with Nicaraguan children through e-mails and art work in Katherine Beesch’s sixth-grade class.

Annette Swierzbinski of Others Are Us approached the school last year to get students involved in the cross-cultural exchange. Swierzbinski is a mother and former art teacher whose goal is to "build bridges and bring another world to our marginalized kids" through the universal language of art.

The children at IS 190 were first asked to draw or paint a depiction of what they thought Nicaragua is like.

“I thought they were just a normal country, you know, not that poor,” said Bennett, who learned Nicaragua is not what he thought initially.

“They have to work real tough, they don’t have much education, they have to build stuff,” said Bennett.

When the same task was given to the Nicaraguan children, they drew farmland with cows and barnyard animals as their idea of New York, explained Bennett with a laugh.

The students learned a lot from their interaction with children so far away. Beesch said her students came away with an appreciation of the free education they are receiving. They see that the Nicaraguan kids really wanted to go to school but could not, she explained. Students learned about letting go of biases and getting to know others without judging them first.

“For New Yorkers, these are poor kids. Now, they’ve seen [how it is in] Nicaragua,” said James E. Mulvaney, deputy commissioner for external relations for the division of Human Rights. The Bronx youth watched videos of the Nicaraguan children picking through heaps of garbage.

The development of art skills was another benefit of the project, said Beech. IS 190 does not have an art program, as the budget has been repeatedly cut over the years, she explained. Through the Others Are Us project, the students learned how to use watercolors and drawing and painting techniques.

The fruits of their labor now hang in the corridors between the NYSDHR offices, “brightening up the drab government building,” according to Mulvaney.

“Now they feel their art is important,” commented Commisioner Kirkland, “it helps them believe in themselves.” The commissioner added to this sense of accomplishment by awarding the children certificates of appreciation for the contribution of art to the NYSDHR.

Previously featured in the same hall were paintings from the Holocaust Center and artwork created by the blind.

As Bennett stood by his drawing of his family enjoying a day outdoors in New York, he explained why he chose this scene: “Some [kids in Nicaragua] have to live on their own or with only their father or mother. I am grateful to have a family to live with.”

The children will be participating in the same exchange this year with the children of another country, yet to be determined. One student eagerly suggested “we should go over to Nicaragua and build a building.”

Others Are Us is putting a call out for children in schools, groups, or as individuals to submit four drawings based on the prompts: “I am …”, “I see…”, “I hope …”, and “I fear …”. The artwork will be compiled into exhibitions, presentations, a book, and a curriculum that “let our kids take the lead when it comes to understanding them and others more fully and authentically,” reads the call-out letter.

For more information on how to participate in the “Part of the Same Rainbow” project, please visit: othersareus.org