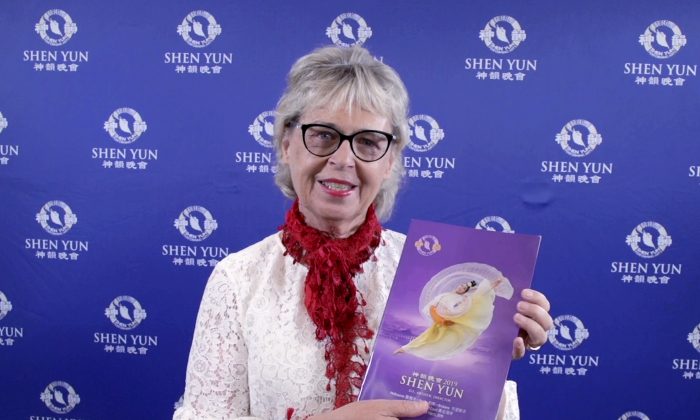 Griffith University senior lecturer in music Dr. Kay Hartwig enjoyed seeing a show that brings harmony to people from so many different backgrounds.

“It is wonderful to see East and West come together with music, dance, and arts, which of course I believe could cure the world and we could all live with peace and happiness if everybody was involved in the arts,” she said. “If you are involved in the arts you can be more peaceful within yourself … I would like to see every child in the world immersed in the arts throughout the whole of their education and they would be able to take that through to their adult life.”

She was also impressed by New York-based Shen Yun’s ability to take the audience on a journey through 5,000 years of Chinese civilisation.

“It is just wonderful that the history of [China] and music and Chinese dance is taking us into the 21st Century and, on that journey, to understand and see that wonderful culture of music and dance so that we don’t lose it,” Hartwig said. “As a musician I loved to see that happening.”

“I like seeing both traditional and modern instruments working together,” she said. “I was fortunate to see a performance in Toronto a few years ago and I really enjoyed having the instruments on the stage, so we could have a wonderful view of the instruments being played as well.”

Her favourite musical instrument from the performance is the pipa.

“A couple of my friends play that instrument as well, so it’s being played in my home,” Hartwig said. “It is wonderful to have these instruments played today, I think it is important for any culture to show the world, and certainly its own people, the history of the music and the arts.”

She felt the music combined with the dance, costumes, and choreography to transport her to another world.

“If you want to go on a journey to learn to see and be entertained by Chinese music, dance, the arts, then come to this concert and you will be transported away,” Hartwig said. “If we were all able to come and enjoy and participate in such a wonderful show, you would go home with a renewed spirit and wonderful feeling.”

“Some of the dancers [leaping] out of the media has really enhanced the show as well,” she said. “So it is really the old and the new working together.”

Also in the audience was watercolor artist Carolyn Clarke, who felt mesmerized by the performance.

“It was absolutely beautiful. I found everything from the costumes to the choreography, just the visual effects, was amazing throughout; it was breathtaking,” she said. “It was just a stunning production that was beautiful, moving, hopeful, and just a delight.”

Clarke found the performance to be very moving and touching.

“I was moved to tears a few times actually. It was, it touched me quite deeply, and the different stories as well,” she said. “Absolutely world class in the different acts, particularly towards the end with the opera singer, her words were beautiful, and her message was very clear [and] very impactful.”

“From a technical perspective, [it was] very well done,” he said. “The change, the transition between the live actors and the [3-D animated] backdrop is quite impressive … it’s wonderful, the colour, the choreography, it is beautiful.”

He also applauded Shen Yun’s artistic director, D.F., for having the courage to show the history and culture the Chinese regime does not want the world to see.

“All we see of Chinese culture presented is what comes out of Mainland China and the issues there with the government presenting the things that they want to show,” he said. “To see other things, to hear that such a performance [like Shen Yun] couldn’t be seen in China is quite disappointing, it should be since [it is also a part of] China’s culture and heritage.”

With reporting by NTD Television and Richard Szabo.