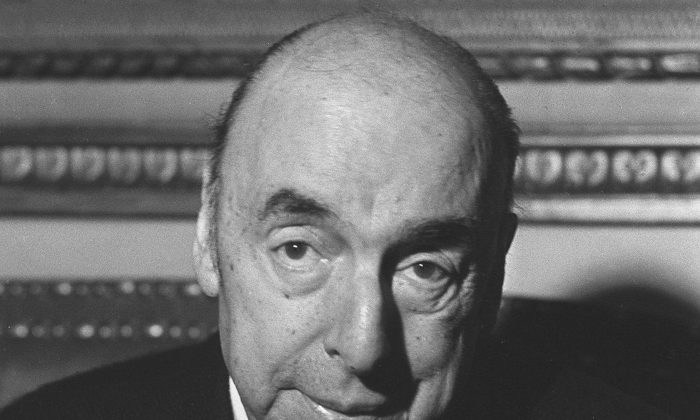 Poet Pablo Neruda, then the Chilean ambassador to France, is pictured answering journalists' questions after the announcement that he had been awarded the Nobel Prize for Literature, on Oct. 21, 1971. A Chilean judge recently ordered the exhumation of Neruda's body in order to try to determine the cause of his death, which his former driver believes was due to assassination on the orders of General Augusto Pinochet. (AFP/Getty Images)
Opinion

The recent court-ordered exhumation of his remains may throw light on the real cause of death of Pablo Neruda, a Chilean writer whom Gabriel Garcia Marquez called “the greatest poet of the 20th century — in any language.” Neruda’s former driver claims that the poet was assassinated on orders of General Augusto Pinochet, and didn’t die of leukemia, as is commonly believed.

Although he claimed that he wasn’t a political writer, Neruda was an artist who knew how to blend politics and poetry in his life. He was born Ricardo Eliecer Neftali Reyes Basoalto in 1904 and died in 1973. He started writing poetry at 10, and when he was 16, he changed his name to Pablo Neruda, probably after the Czech writer Jan Neruda.

I started reading him when I was a medical student in the 1960s, and haven’t stopped. How could I? Two of his books—“Twenty Love Poems and a Song of Despair” (written when he was only 20) and “The Captain’s Verses”—are intertwined with my first (mostly failed), sentimental adventures. Like millions in Latin America—and across the world—once I read Neruda, he became part of my life.

Neruda’s political beliefs were behind some of his most powerful poems. For me, he represents the very ideal of the writer as a political man. When he was 23, the Chilean government made him honorary consul in Burma, Ceylon, Java, Singapore and later Argentina, and in the Spanish cities of Barcelona and Madrid. The Spanish Civil War, during which his friend, the great Spanish poet Federico Garcia Lorca, was murdered, had a profound influence on his writing and his political activities.

He joined the Republican movement, first in Spain and then in France. In 1939, he was appointed Chilean consul in Paris, and from there, he coordinated the emigration to Chile of as many as 2,000 Spanish Republicans who had first escaped to France.

In 1943 he returned to Chile and joined the protest against President Gabriel Gonzalez Videla’s repressive actions against striking miners. In 1945, he became a senator and joined the Communist Party. The government soon expelled him, and from 1947 to 1949 he lived in hiding.

In January 1948, Neruda delivered one of the most passionate speeches on Chile’s political history: He read out the names of 628 people being detained at the Pisagua concentration camp without having been interrogated or formally charged. That speech became known as “Yo Acuso” (I accuse,) after French novelist Emile Zola’s 1898 denunciation of the French government’s treatment of Alfred Dreyfus. In 1949, he fled to Europe.

Neruda’s greatest poetic achievements were fueled by his political beliefs. In his epic work “Canto General (General Song),” published in 1950, Neruda celebrates the richness and beauty of Latin America, and the people’s struggle for peace and social justice. Part of the work is the poem “Alturas of Macchu Picchu” (Heights of Macchu Picchu,) a celebration of pre-Columbian civilization.

He lived in Europe for three years and returned to Chile in 1952, whence he continued traveling extensively overseas. He visited the United States in 1966 and in 1971 was awarded the Nobel Prize in literature, which he received after being stricken with cancer.

When Salvador Allende was elected president of Chile in 1970, he appointed Neruda as Chile’s ambassador to France, where he lived from 1970 to 1972. In 1973 he returned to Chile, but in September of that year, Augusto Pinochet, with help from the CIA, overthrew Allende’s government.

Neruda’s life, I firmly believe, was shattered by Pinochet’s coup and Allende’s suicide. Neruda died only 12 days after the coup. Shortly before his death, as he lay sick in bed, his house was ransacked by a military unit. When he saw the commander of the unit, weapon in hand in his bedroom, Neruda, who could hardly speak, told him, “There is only one dangerous thing for you in this house—poetry.”

Officially, Neruda died of leukemia. The exhumation of his remains will bring the truth about the cause of his death. Whatever the results of this investigation I, however, believe that this man, the saddest of men after the death of his friend Salvador Allende and the defeat of democracy in Chile, died of a broken heart.