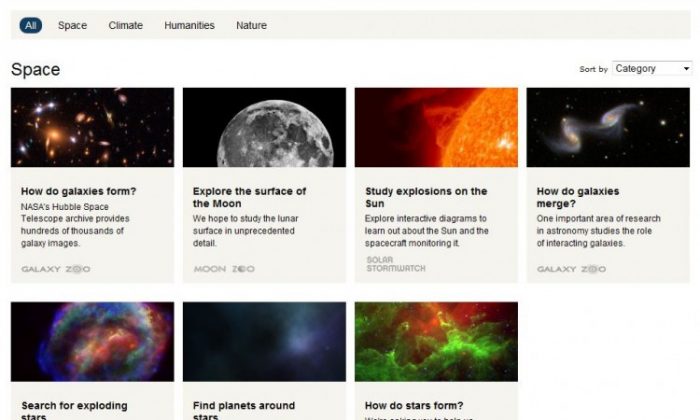 A screenshot of Zooniverse. (The Epoch Times)
Science

Bringing Out the Hidden Scientist in You

Imagine assisting astronomers with classifying galaxies, observing solar storms, or finding new planets—all in the comfort of your home.

All this is made possible by Zooniverse, a website providing people from all walks of life with an opportunity to support these real science projects through the Internet.

“Scientists in many fields are struggling to cope with the amount of data they can now collect,” Dr. Chris Lintott of Oxford University, director of Zooniverse, told The Epoch Times via email. “Luckily, thanks to the Web, we can now collaborate with hundreds of thousands of volunteers who are willing to assist. Typical problems are those tasks in which humans can still out perform computers—for example, in pattern recognition.”

In no time, you could master identifying craters on the moon, picking out characteristics of solar storms, and differentiating different types of galaxies. The online tutorial and learning materials make it simple and fun.

“The most powerful role our projects can play is to break down the barrier between scientists and the public,” Lintott said. “Too often, we give the impression that science is something that other people do, but with Zooniverse the public can make a real difference.

“We design the sites so that anyone can take part—I know 6-year-olds classify galaxies with their parents—but we’re also working to try and use the sites more formally in schools.”

“We were trying to study 1 million galaxies drawn from the Sloan Digital Sky Survey. We wanted to classify them according to their shapes, and that’s something we knew humans were better than computers at doing,” Lintott said. “After getting one student, Kevin Schawinski, to look through 50,000 images, we realized we needed help and created Galaxy Zoo.”

Zooniverse also offers an interactive project to explore the sun, and the STEREO spacecraft monitoring space weather that influences climatic conditions on Earth, as well as a few other space projects.

Apart from this, there is the opportunity to get involved with humanities and nature projects too. Volunteers can help transcribe known texts and data to study the lives of ancient Greeks and assist marine researchers to understand how whales communicate and what these mammals say.

“We have more than 600,000 registered users. It’s difficult to measure the exact time spent, but we think the current activity on Zooniverse.org is the equivalent of hiring 350 people who do nothing but classify,” Lintott said.

With this number of users, the classification of data can be made accurate.

“The same image is shown to many people, so that mistakes get evened out,” Lintott explained. “That’s one of the advantages of this sort of work—even the most dedicated expert will get tired and make mistakes, but collectively our volunteers don’t.”

A dedicated science team and volunteers are responsible for developing projects. If you’re interested in a specific project, whether to obtain data or become more involved, Zooniverse might prove helpful.

“We’re looking for new projects, so anyone with large data sets or a good idea should get in touch,” Lintott said.

The team is also working toward using the website more formally in schools.

Lintott encourages keen citizen scientists to watch the website for “lots of new projects” being developed.

To take part, go to Zooniverse.org.