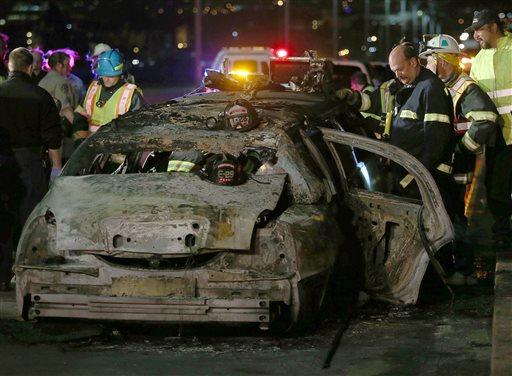 San Mateo County firefighters and California Highway Patrol personnel investigate the scene of a limousine fire on the westbound side of the San Mateo-Hayward Bridge in Foster City, Calif., on Saturday, May 4, 2013. Investigators are still trying to determine the cause of the fire. (AP Photo/Oakland Tribune-Bay Area News Group, Jane Tyska)
US

Bride killed limo fire: Investigators are trying to determine why the back of a stretch limousine burst into flames on a San Francisco Bay bridge, trapping and killing five of the nine women inside on a girls’ night out, including a newlywed bride.

It happened late Saturday night as the Lincoln Town Car crossed the San Mateo-Hayward Bridge on the south end of the bay.

The 46-year old driver, the only one of the 10 people inside the limo to escape completely unscathed, said that he misunderstood a knock on the partition. One of the woman knocked and told him she was smelling smoke.

“They had the music up in the back, and I figured she was asking, ‘Can I smoke?’ ” Brown told the San Francisco Chronicle. “I said, ‘The owner doesn’t allow smoking in the car, and we only have four minutes to the destination.’ ”

The driver, Orville Brown, said at first he misunderstood what one of the passengers in the back was saying when she knocked on the partition between the passenger area and the driver compartment and complained about smelling smoke.

The women knocked again, and when he rolled down the partition, the women were shouting “Smoke, smoke!” and “Pull over, pull over!”

He helped four of the surviving women escape through the partition. One of the women ran around to the passenger door on the back side of the limo, but by then it was engulfed in flames.

“When she opened that back door, I knew it wasn’t a good scene,” Brown said. “I figured with all that fire that they were gone, man. There were just so many flames. Within maybe 90 seconds, the car was fully engulfed.”

Two of the women who survived were in critical condition on Monday.

The five women trapped inside were found dead as firefighters doused the vehicle — all huddled near the partition, apparently unable to squeeze through.

“My guess would be they were trying to get away from the fire and use that window opening as an escape route,” said San Mateo County Coroner Robert Foucrault.

The San Mateo Fire Department was looking into the cause of the fire, while the coroner’s office was working with the California Highway Patrol to determine if anything criminal occurred.

“We don’t believe there” was, Foucrault said.

The limo driver, Brown, told the Chronicle that he was planning to give his next two paychecks to the victims’ families.

“Man, they were having so much fun,” he said. “Beautiful women just wanting to go to a party.”