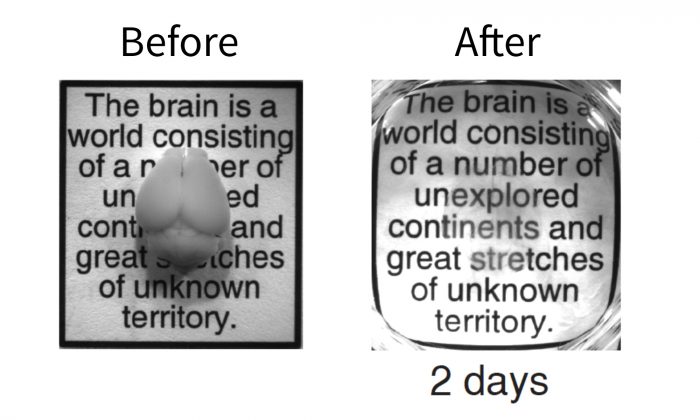 Intact adult mouse brain before and after the two-day CLARITY process. In the image on the right, the fine brain structures can be seen faintly as the areas of blurriness above the words "number," "unexplored," "continent" and "stretches." http://med.stanford.edu/ism/2013/april/clarity.html#sthash.wN07wLza.dpuf
Beyond Science

Stanford University researchers have developed a breakthrough approach to studying neural networks without physically dissecting the brain. They’ve figured out a way to make a brain almost completely transparent in order to see how it works without having to dissect it.

Neuroscientists have struggled to study how the brain works and its complex structural circuitry. One of the biggest challenges has been how to reach into the brain without damaging or altering parts of the brain.

By combining neuroscience and chemical engineering techniques, the team has created the transparent brain in a process they call CLARITY.

“CLARITY promises to revolutionize our understanding of how local and global changes in brain structure and activity translate into behavior,” said Paul Frankland, PhD, in a news release from Stanford. Frankland is a senior scientist in neurosciences and mental health at the Hospital for Sick Children Research Institute in Toronto, who was involved in the research. It can also be used to study how diseases change the brain.

Experiments were primarily conducted on the brain of a mouse, but researchers have used CLARITY on zebrafish and on preserved human brain samples with similar results. This shows the door for potential future application on other human samples and other organisms.

Breaking the Limitations of the Past

CLARITY, a research project headed up by Karl Deisseroth, ultimately allows the brain’s important features to stay fully in tact while some of the chemical elements are being extracted.

It seeks to withdraw opaque elements, such as lipids, away from the brain so it is more permeable to chemicals and light. To do this, the brain needs to be immersed in a kind of monomer solution called hydrogel so that the structure won’t fall apart when the lipids are being extracted.

What remains is a completely original 3-D brain structure that’s now transparent and can be manipulated by different chemicals for further research. The past method of dissection and extraction of lipids would cause the remaining brain tissues to fall apart.

This new approach fundamentally changes the way we study the brain from slicing to probing of macromolecules in 3-D formats.

“Studying intact systems with this sort of molecular resolution and global scope—to be able to see the fine detail and the big picture at the same time—has been a major unmet goal in biology, a goal that CLARITY begins to address,” said Deisseroth in the Stanford paper.

CLARITY can not only gather neural connections within the brain but can also gather rich molecular information of a cell’s function. Something that is unprecedented.

“We thought that if we could remove the lipids nondestructively, we might be able to get both light and macromolecules to penetrate deep into tissue, allowing not only 3-D imaging, but also 3-D molecular analysis of the intact brain,” said Deisseroth.

“CLARITY may be applicable to any biological system, and it will be interesting to see how other branches of biology may put it to use,” Deisseroth said.