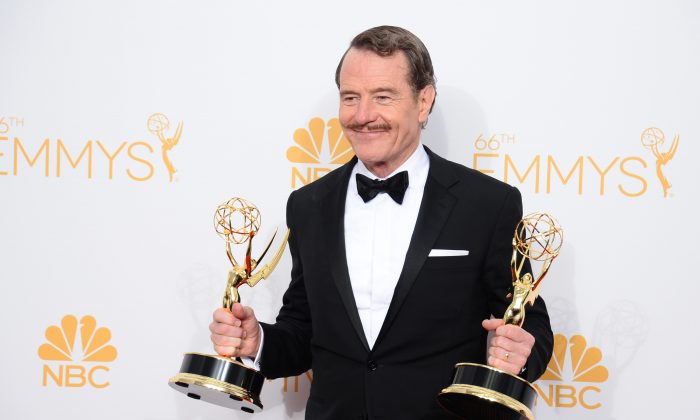 Breaking Bad Season 6 is just a myth, and creator Vince Gilligan didn’t say it would start shooting January 2015. Bryan Cranston, winner of the award for outstanding lead actor in a drama series for his work in “Breaking Bad," poses in the press room at the 66th Annual Primetime Emmy Awards at the Nokia Theatre L.A. Live on Monday, Aug. 25, 2014, in Los Angeles. (Photo by Jordan Strauss/Invision/AP)
Life & Tradition

It says: “Breaking Bad fans around the world are celebrating the stunning, glorious and amazing news announced today: Walter White is not dead, and there will indeed be a sixth season of the wildly-popular, award-winning AMC drama… This shocking and exciting news comes not from an internet message board or the rumor mill but from series creator Vince Gilligan. In an exclusive CNN interview late Sunday evenening, Gilligan dropped the bombshell.”

The National Report used to have a disclaimer, saying it’s satire and its stories shouldn’t be believed. However, it was taken down a few months ago.

Another website saved it, and it says: “*DISCLAIMER: National Report is a news and political satire web publication, which may or may not use real names, often in semi-real or mostly fictitious ways. All news articles contained within National Report are fiction, and presumably fake news. Any resemblance to the truth is purely coincidental . The views expressed by writers on this site are theirs alone and are not reflective of the fine journalistic and editorial integrity of National Report.”

All the quotes in the Breaking Bad article are fake.

It’s also worth noting that this article was posted about a day before “Breaking Bad” cleaned up during the Emmy Awards on Monday night.

Bryan Cranston, who plays Walter White, won an Emmy for his performance on the AMC show.

“Even I thought about voting for Matthew [McConaughey],” Cranston said, CBS reported.

“I don’t know why I have been blessed with an abundance of good fortune in my life,” he said. “I did happen to stumble upon finding a passion that created a seed and bloomed into something so wonderful for me. I love to act and it is a passion of mine, and I will do it until my last breath.”

“I’d like to dedicate this award to all the ‘Sneaky Petes’ of the world who thought that maybe settling for mediocrity was a good idea because it was safe. Don’t do it. take a chance. Take risk. Find that passion, rekindle it. It’s really worth it. God bless you.”

AP update: Not a good night for movie stars at Emmys

Instead, the Emmys opted for the tried and true Monday night, giving a long goodbye kiss to “Breaking Bad” and its cast, and the fifth straight award for best comedy to ABC’s “Modern Family.”

The bounty proved Emmy voters have a long memory, since the “Breaking Bad” finale aired 11 months ago.

“Thank you for this wonderful farewell to our show,” creator Vince Gilligan said.

“Modern Family” co-creator Steve Levitan almost seemed at a loss for something new to say as the ABC show matched the five-year winning streak of “Frasier” in its heyday. Actor Ty Burrell won a best supporting actor award.

For much of the evening, the Emmys seemed to bask in Hollywood’s glow, especially McConaughey’s aura. He was the willing foil for jokes, particularly by Jimmy Kimmel. “You don’t belong here,” Kimmel said. “And take Julia Roberts with you.”

Director Gail Mancuso of “Breaking Bad” chose to look at McConaughey as she was accepting her award. “I knew if I had to look at my cast, I would tear up,” she said backstage. “I thought, ‘what’s the next best thing? Matthew McConaughey.’ He was sitting right there.”

Yet the only time McConaughey went on the stage was when he and “True Detectives” co-star Woody Harrelson were presenters. Their HBO series was the subject of much pre-show hubbub — many in Hollywood thought it should be in the miniseries category, not drama — but it proved a moot point as the major awards went elsewhere.

Roberts and Ruffalo weren’t honored for their roles in the HBO movie about the early days of AIDS, “The Normal Heart,” although the project won the Emmy for best TV movie.

Jumping back and forth between television and feature films isn’t as unusual as it used to be, with television in a robust creative period. But with a lot of quality work out there, names aren’t enough to guarantee an award.

Emmys host Seth Meyers made note of the unusual time slot for the awards show, on a Monday (Sunday is the usual date) in late August. It was NBC’s turn to air the show, and the network didn’t want to pre-empt its lucrative Sunday night NFL football package.

“If I understand television, it means the Emmys are about to be cancelled,” Meyers joked.

Once the awards began, some of television’s royalty added to their trophy cases. Jim Parsons, star of television’s most popular comedy, “The Big Bang Theory,” won his fourth straight award for best comedy actor. It was the third year in a row for Julia Louis-Dreyfus of HBO’s “Veep” to win the best comic actress award.

Julianna Margulies, the star of CBS’ “The Good Wife,” was the beneficiary of an especially strong season for the show, winning her second Emmy as best actress in a drama.

For all the pre-show talk about new forms of television distribution, it was a good night for network television, between Margulies, Parsons and “Modern Family.” Allison Janney won a best supporting actress award for her role in the freshman CBS sitcom, “Mom.”

Netflix and its biggest shows, “House of Cards” and “Orange is the New Black,” didn’t win any major awards.

The Emmys included a touching tribute to Robin Williams, who died earlier this month, by his comedian friend Billy Crystal.

“He made us laugh. Hard. Every time you saw him,” Crystal said.